A Landowner Shout Out

Last week the blog surpassed a half a million pageviews and the TMS is just getting started.  As the frequent visitors to the blog know, this is a pro bono effort (translation: free)  Significant content is provided to all at no charge.  All I've asked for in return is support for our favorite charity.  I wanted to take this moment to present the top donors over the past year.  Recently, a mineral owner made quite a donation after selling some minerals ($20,000).  He asked to remain anonymous, but lets refer to him as Mr. Hegetsit.  My goal for the year is still to raise $100,000.  We've raised $56,270 to date and the year is quickly coming to a close. Over 90% of the visitors to the site are locals that live "in the trend".  I estimate that the oil industry has injected over $500,000,000 into the local economy via lease bonus checks.  The industry has already spent over $200,000,000 in well costs.  Over a half a billion dollars already invested in total.

Over the last 18 months since the inception of the blog, I have answered hundreds of emails and phone calls from landowners asking questions about the play or their land in general.  "Why won't they lease my land?". "Is my land in a good location?".  "They're drilling on my land but won't tell me anything!".  "What's the Thomas well doing?".  Landowners, I'm now giving you a "shout out" and saying that we need your support.  The year is almost over and the tax man will be coming soon.  Why not donate to a great cause instead of giving it to the IRS? My goal is to continue this as a free service despite the industry asking for a subscription service with weekly Scout Reports and metrics. This is your moment to speak loudly.
........And then we have those that continue to use it to attempt to move their penny stock:
http://prymeenergy.com/IRM/Company/ShowPage.aspx/PDFs/2133-58642492/TuscaloosaMarineShale 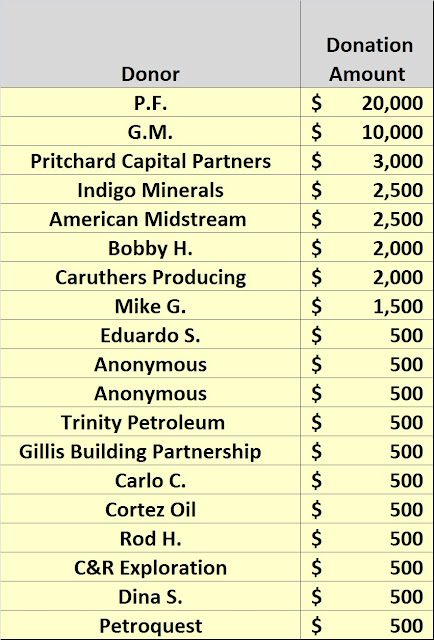 Posted by Kirk Barrell at 4:58 AM No comments:

EOG didn't take long to exhibit their leadership and "know how" in the TMS.  They drilled the Dupuy Land Co. 20H-1 in record time.  At 583' per day, this is the fastest horizontal well drilled in the play in this latest TMS era.  A measured depth of 16907' in 29 days with a lateral of 5169'.  Impressive.  Many will ask if the western portion of the TMS-East is easier to drill.  I would definitely say not.  I believe that this is an experienced drilling department "doing what they do".

EOG's results in the Eagle Ford shale are legendary.  At the recent Harts DUG Eagle Ford Conference, it was interesting to see how EOG outperforms all of its competition.  In that play, their adjacent competitors are not getting nearly the same results.  As I've said many times, we're fortunate to have them in the TMS.  The bar has just been set higher. 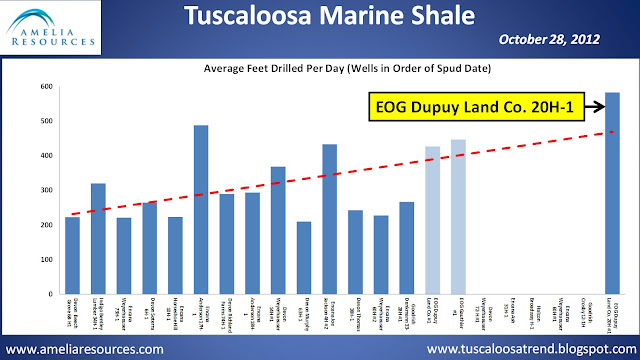 We had tremendous interest in all of our joint venture offerings to date and fully expect to meet or exceed our targets. However, there are significant assets available for joint venture in both the Canadian and U.S. marketplace. As such, this may limit the size of the packages that can be dealt on and extend the time that it may take to complete a transaction.

For example, we've been advised that our combined Tuscaloosa Marine Shale, Eaglebine and Mississippian Lime package may be too large for most interested parties at this time, and so we are allowing the plays to be bid on individually. The value of Encana's joint venture offerings and asset packages greatly exceed the $1.5 billion to $2 billion net divestitures needed to meet our combined 2012 guidance and 2013 target, allowing us to be highly selective in the deals we choose to transact on.

Encana's motivation in completing joint venture transaction varies depending on the assets involved. In the case of the Duvernay, our early light oil plays in the USA division, the primary driver is to de-risk our capital program and accelerate the pace of which we can reach commerciality. With partnerships such as those that we've fostered with KOGAS and Mitsubishi, the plays involved have been largely delineated and the majority of the exploration risk has been removed. In other words, we achieved immediate value recognition for reserves and contingent resources associated with these types of assets.

Two days at the Harts "DUG Eagle Ford" conference were educational.  The Eagle Ford is quite a play. Lets hope that the TMS will be at the same place in three years.

The stats below were presented by U.S. Capital Advisors.  I thought that they could serve as an interesting comparison.  We seem to hear about the 4000 bopd "monster" Eagle Ford wells, but comparing to the averages across the entire play is interesting.  I conclude that the TMS will be competitive in the future.  Of course this assumes a significant decline in well costs.


Posted by Kirk Barrell at 1:35 PM No comments:

Goodrich's frac job on the Denkmann 33-28 H-1 should be completed.  Here's some charts to use to make some estimates.  This should be a great location based on the thickness of pay in the area.  With a measured depth of 18278, I calculate a potential completed lateral length of 4948'.

Based on my algorithm that utilizes the parameters from the prior TMS completions, I'm predicting a 30 day initial potential of 857 boepd (bottom slide below).  I hear that the cement job may not have gone well.  If that's the case, then it could have a negative impact on the result.  I understand that the frac job planned for 14 stages with 400,000# of proppant per stage.  This will be an interesting datapoint because the lateral length is not very long, but they are using a lot of proppant per stage.

The charts below provide some comparisons for initial potentials (IP) of the prior completions.

The chart below illustrates that 400,000# of proppant per stage will make this well the 3rd highest so far.  More proppant is better but costs more. 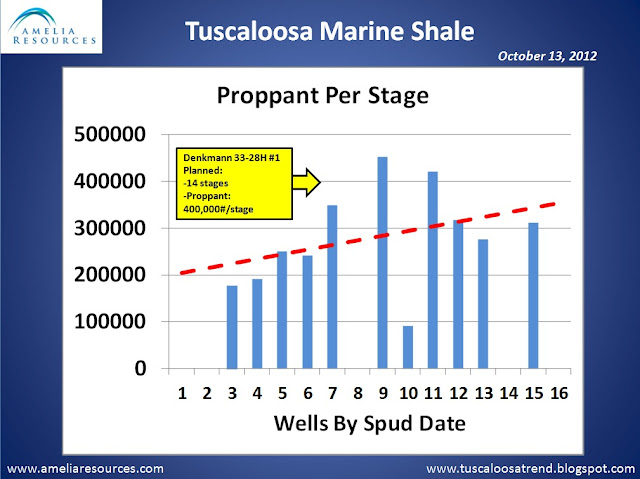 The chart below at this early stage doesn't serve as a great predictor tool because the proppant levels have varied greatly across the wells. 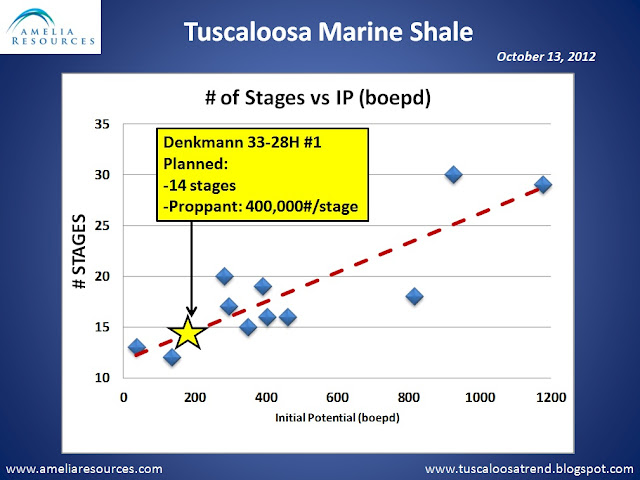 The chart below indicates that the total proppant should result in an initial potential of 430 boepd. 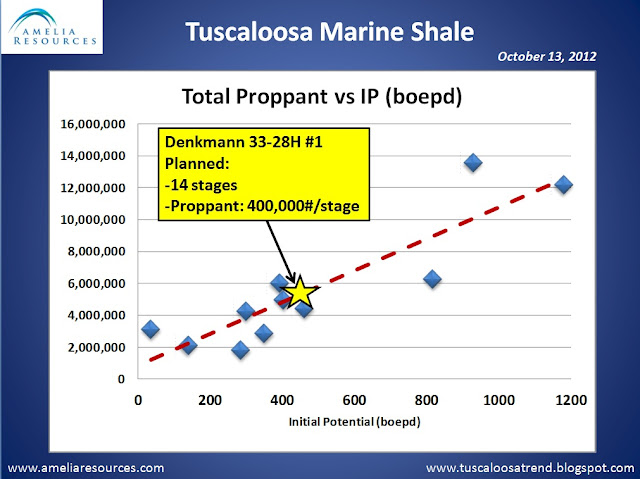 The chart below illustrates that the high level of proppant per stage should result in a higher than average initial potential. 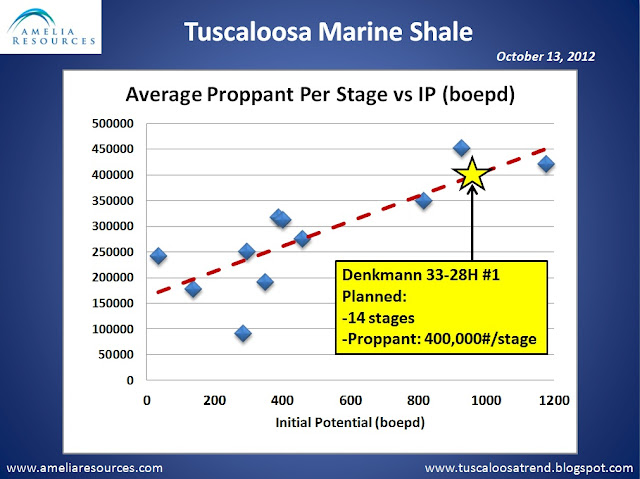 The log below illustrates the impressive reservoir quality and thickness in this area.  The Denkmann location has an estimated pay thickness of 125'.  Based on 14 stages with 400,000# of average proppant per stage results in an estimated IP30 of 857 boepd. 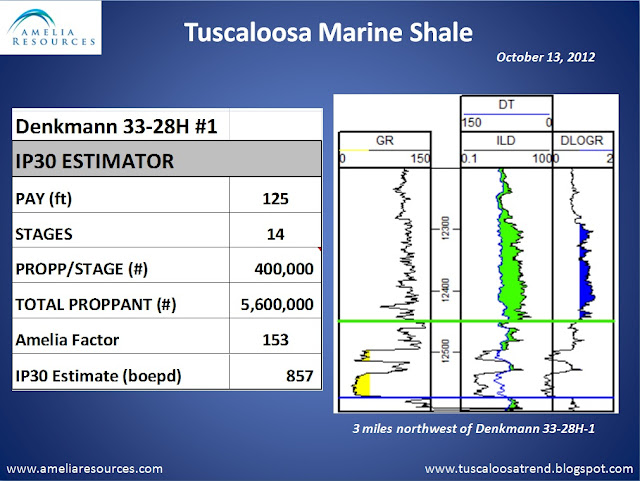 Posted by Kirk Barrell at 7:48 PM No comments:

I'll be attending the DUG Eagle Ford conference in San Antonio this week. I hope to learn some more about the TMS's "Cretaceous Cousin".  Hopefully it will be a review of what the TMS will look like in two years.
http://www.dugeagleford.com/

Posted by Kirk Barrell at 8:35 AM No comments:

Effective October 15, 2012, the EPA must be notified at least 2 days in advance of any hydraulically fractured wells.  It will be interesting to see how this plays out.

I was contacted by Charlotte Batson of Batson & Company informing me of an event that they are hosting in November near McComb, MS.  The two day seminar will focus on surface related issues regarding shale oil.  Topics such as leasing, land management, and business opportunities will be discussed.
http://www.theenergyevolution.org/

Posted by Kirk Barrell at 8:17 AM No comments:

That equates to 402 boepd.  I expect the well to improve as it cleans up and as they open the choke.

On September 24, 2012, I made this prediction on the Thomas IP and IP30:
"Based on the information below, I would expect the well to IP in the 350-500 boepd range.  Devon is using more proppant per stage than in the past, so it could be higher.  I would expect the well to have little gas.  424 boepd is my prediction for an IP30."
http://tuscaloosatrend.blogspot.com/2012/09/devon-thomas-38h-1-ip-prediction.html

That was based on our algorithm constructed from the database of existing completions along with a calculation of total feet of pay from well logs. 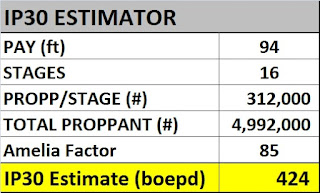 The IP for the well plotted directly on the best fit line on the chart below. 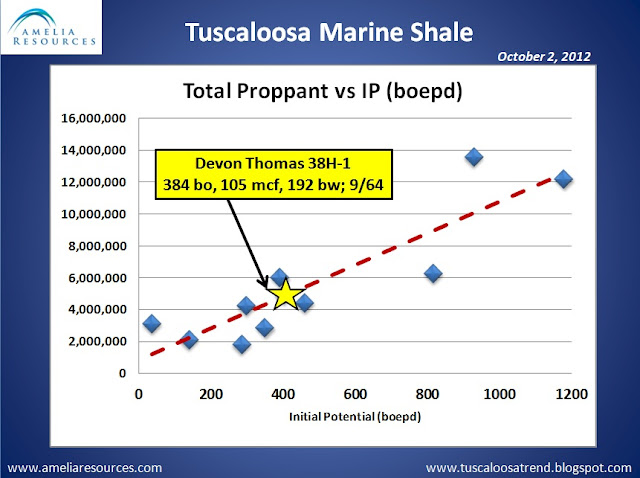 The play map below illustrates a good geographic spread of locations in the eastern half of the TMS-East.  EOG's upcoming activity will start to fill out the western portion of the TMS-East.  Halcon will quickly determine the potential in the TMS-West.  2013 will be significant for this play.

EOG has permitted the horizontal offsets to their two vertical pilot holes: Gauthier #1 and Dupuy #1.


Posted by Kirk Barrell at 4:29 PM No comments:

I've assembled data from 11 oily unconventional plays across the U.S. to make a comparison with the Tuscaloosa Marine Shale.  With only ten completions in the play, we're still very much in the "R&D" and "derisking" phase of this play.  To date, well costs have been a popular topic.

The chart below presents well costs vs estimated ultimate recoveries (EUR) for eleven unconventional plays.  I've also placed three TMS wells with their actual or AFE costs for comparison.  The decrease in costs is occurring and I expect the costs to continue to decline.  The AFE of the Weyerhaeuser 60H-1 of $12.1 million is the lowest that I've seen to date.  Keep in mind that once this play shifts to "development mode", the use of the resource play hub (RPH) approach, will result in significant cost savings.  I've heard that locations are currently costing $1 million.  Drilling 4-10 wells from one pad will be very cost effective.

The chart below indicates that for the TMS to have similar "cost to EUR" relationships, the drill costs have to range from $9-12 million with EUR's in the 620-750 MBOE range.  Encana has already announced that they believe 730 MBOE is achievable.  I understand that one of the TMS operators has $9.5 million for well costs in their 2013 budget. 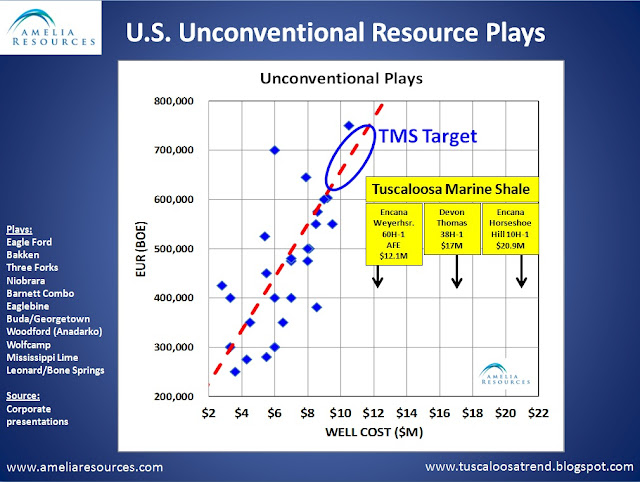