I was entertained by an infamous Baton Rouge landman in July, 2011 when he told me, "It's a shale play. Geology doesn't matter!!".
Well maybe the time has come for the TMS geology to start to reveal itself.

In the past, I've presented a list of "model wells" that meet these three criteria: 1) per stage proppant level of 425-600k 2) a lateral length of at least 5000' and 3) a landing zone in the bottom 70' of the TMS.  If all three of these criteria are met, a good result has occurred.

Last week a result of 815 boepd was released for the Goodrich Nunnery 12H-1.  The "financial quants" appeared to be disappointed. With a net pay of 75', this result is not only expected, but good for the pay thickness.  At a TVD-SS of -10800', this well with improved initial rate and lower costs will present positive economics in the months ahead.  The main "takeaway" from the result is that every location is not "geologically" equal.  Thickness, depth, pressure, natural fractures, GOR, TOC, porosity, and permeability will all come into play.  I have presented the Passey Log Method many times in my presentations.  It is my conclusion that this analysis method works very well in this play and presents consistent trends.  Isopaching D-Log-R will define very clear trends in pay thickness.  The GDP Lewis 30-19H-1 has 110' of net pay and had an initial potential of 1450 boepd.

Most importantly, initial potentials are not very good for assessing future well results.  Yes, it gives you an initial rate, but the first 30 days of production provides a much better "initial metric". Ultimately the decline curve over the first year will be most significant. 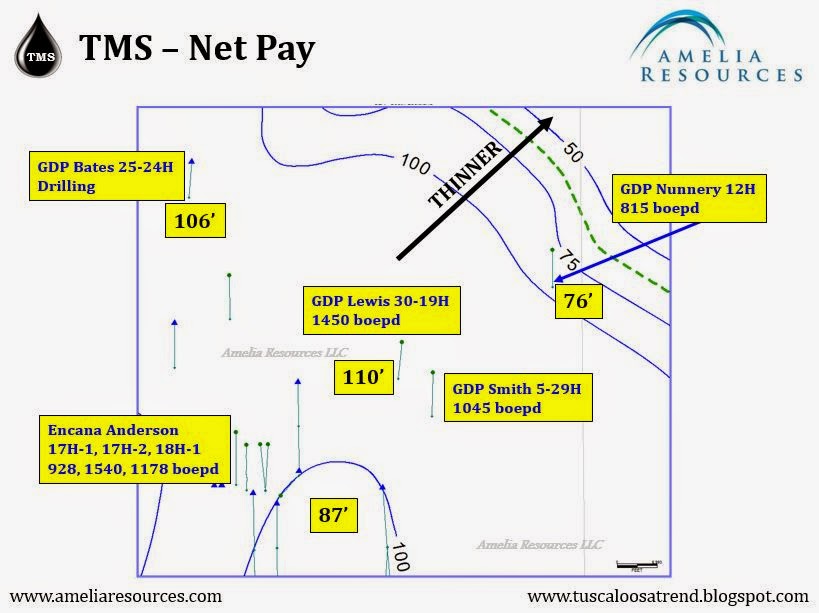 In the coming weeks, we will see another geological contrast with the GDP SLC 81H-1 and the GDP Beech Grove 94H-1.  The net pay in the Beech Grove of 95' will not likely compare in result with the SLC 81H-1 (157').  Through time, the thickness will be added as a 4th dimension to the "model wells" criteria.  The Nunnery 12H-1 is a good example of a well that met the first three criteria, but the thickness of porous, naturally fractured, organic rock makes a difference.

The chart below compares the results from five recent wells. 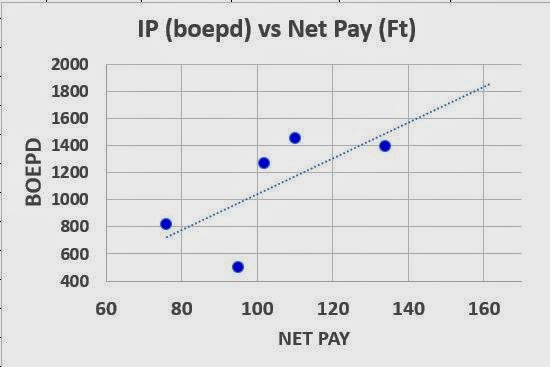 I look forward to seeing everyone at the TMS Summit this week.

http://www.infocastinc.com/events/tuscaloosa
Posted by Kirk Barrell at 3:11 PM No comments:

Note that this research was not conducted as part of the Tuscaloosa Marine Shale Graduate Research Consortium (TMSGRC).
Posted by Kirk Barrell at 10:13 AM 1 comment:

Halcon's announcement of the initial potential rate for the Horseshoe Hill 11-22H-1 yesterday revealed a higher than expected GOR.  I've integrated that into an updated GOR map of the play. It's starting to take some shape and reveal possibly some "dip oriented" trends versus just a "strike" trend aligned with depth. 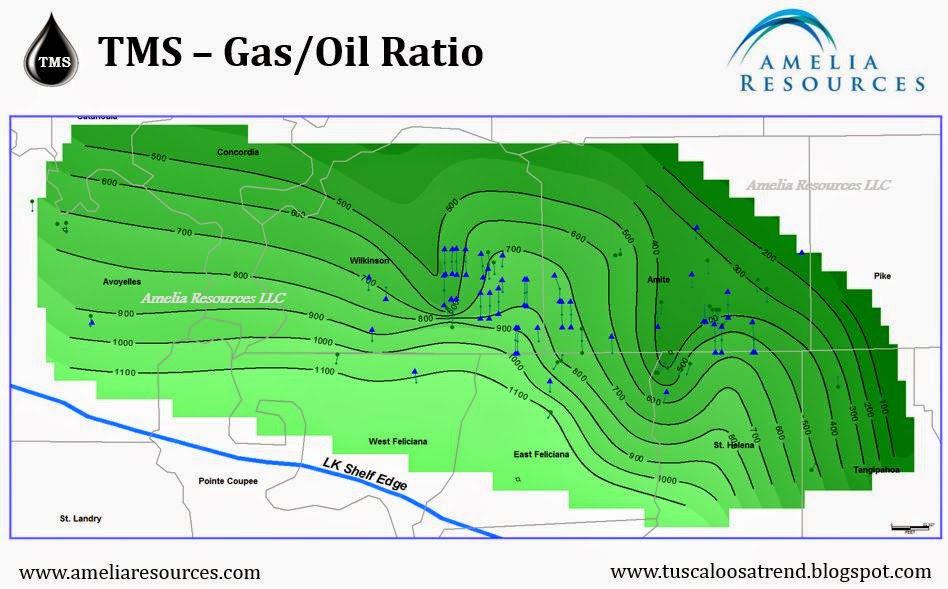 Halcon made an announcement covering several aspects of their TMS project. Here's my commentary:

-Horseshoe Ill 11-22H-1:
----excellent initial potential; Using a boepd/1000' factor from the Blades well, I estimated an IP of 1930 boepd. Using a boepd/stage factor from the Blades well, I esimated an IP of 2032 boepd but that was using 32 stages. With 24 stages confirmed, that would equate to 1524 boepd.  The IP without the estimated NGL's for the Horseshoe Hill well is 1391 boepd.  This equates to a 9% error compared to the 12% error on the Lewis well estimate. These are starting to get close now that the completion "recipe" is more consistent.  Being that the stage spacing is still varying, using the boepd/1000' factor will be less accurate in the near term.
http://tuscaloosatrend.blogspot.com/2014/05/initial-potential-metrics-and.html
----Gas/Oil Ratio higher than expected; high GOR is good because the gas helps to lift the oil; it enhances flow rate and ultimately long term production. The Crosby 12H-1 also had a higher than expected GOR.
----long lateral of 7060' drilled quickly - major improvement
----39 days to drill spud to TD is excellent especially considering the long lateral
-Significant commitment: spud 10 to 12 operated wells in the TMS running an average of two rigs in 2014.  The Company also expects to participate in 15 to 20 non-operated TMS wells in 2014.
-Apollo funding: significant capital provider endorses the play; hard to calculate a $/Acre value on the deal; indicates long term commitment to the project
-Midstream commitments: also indicates long term commitment to the play

,  (GLOBE NEWSWIRE) -- Halcón  (NYSE: HK) ("Halcón" or the "Company") today provided an operational update related to its 314,000 net acre position in the  ("TMS").
The Horseshoe Hill 11-22H-1 (92% WI) well in , achieved a 24-hour average initial production rate of 1,208 barrels of oil per day and 1.1 million cubic feet per day of 1,551 BTU natural gas on a 19/64 inch choke.  Based on gas composition analysis and assuming full ethane recovery, the Company estimates that the well would produce an additional 212 barrels of NGLs per day for a total 24-hour average initial production rate of 1,548 barrels of oil equivalent per day.  The well has a 7,060' effective lateral and was completed with 24 frac stages, 21 of which were effectively pumped and 3 of which were partially pumped (less proppant placed than designed).  Halcón drilled this well in 39 days (spud to TD).
The Company has drilled the Black Stone 4H-2 (87% WI) well in , in 28 days (spud to TD) with a 5,400' lateral.  Completion operations are expected to commence this month.
Halcón recently spudded the Fassman 9H-1 (84% WI), located in , with a second rig and is planning a 6,030' lateral for this well.
The Company has also spudded the SD Smith 1H (62% WI), located in , and is planning a 7,660' lateral for this well.
Halcón plans to spud 10 to 12 operated wells in the TMS running an average of two rigs in 2014.  The Company also expects to participate in 15 to 20 non-operated TMS wells in 2014.
In addition, Halcón announced the signing of a definitive agreement with credit funds and accounts managed by affiliates of Apollo Global Management, LLC (NYSE: APO) (together with its consolidated subsidiaries, "Apollo"), which will invest up to  in the Company's wholly owned subsidiary,  ("HK TMS").  Upon closing, HK TMS will hold all of Halcón's acreage in  and  that is prospective for the TMS formation.  The Company holds 100% of the common shares of HK TMS and is the sole manager of HK TMS.  Apollo will contribute  in cash consideration for 150,000 of HK TMS preferred shares, and under certain circumstances, may acquire up to an additional 250,000 preferred shares of HK TMS on the same terms.  Holders of the HK TMS preferred shares will receive quarterly cash dividends of 8% per annum.
In conjunction with the issuance of the preferred shares, HK TMS agreed to assign a 4.0% overriding royalty interest ("ORRI"), subject to reduction to 2.0% under certain circumstances, in 75 net wells to be drilled and completed on its TMS acreage. The number of wells subject to the ORRI will increase to the extent that Apollo subscribes for additional preferred shares, with a maximum of 200 net wells subject to such ORRI if Apollo subscribes for the full additional 250,000 preferred shares.
acted as exclusive financial advisor to Halcón in connection with the TMS partnership with Apollo.
The Company's midstream subsidiary, Halcón Field Services, has acquired rights to develop an oil handling terminal at the , a location with direct access to more than two million barrels per day of refining capacity on the .  The  has existing infrastructure including loading docks, pipelines and direct access to the Canadian National railroad.
, Chairman and Chief Executive Officer, commented, "We are off to a solid start in the TMS, and the capital from our partnership with Apollo will help us to accelerate activity.  The TMS is quickly evolving into a world-class oil play."
Source: http://investors.halconresources.com/releasedetail.cfm?ReleaseID=853041

EOG Permits Well In The TMS-West

EOG has permitted a well in Vernon Parish in the TMS-West. They will be drilling the well with 50% partner, Indigo Minerals. The well should spud in July. This will be a significant test for the TMS-West. I hope that the TMS-West reignites. 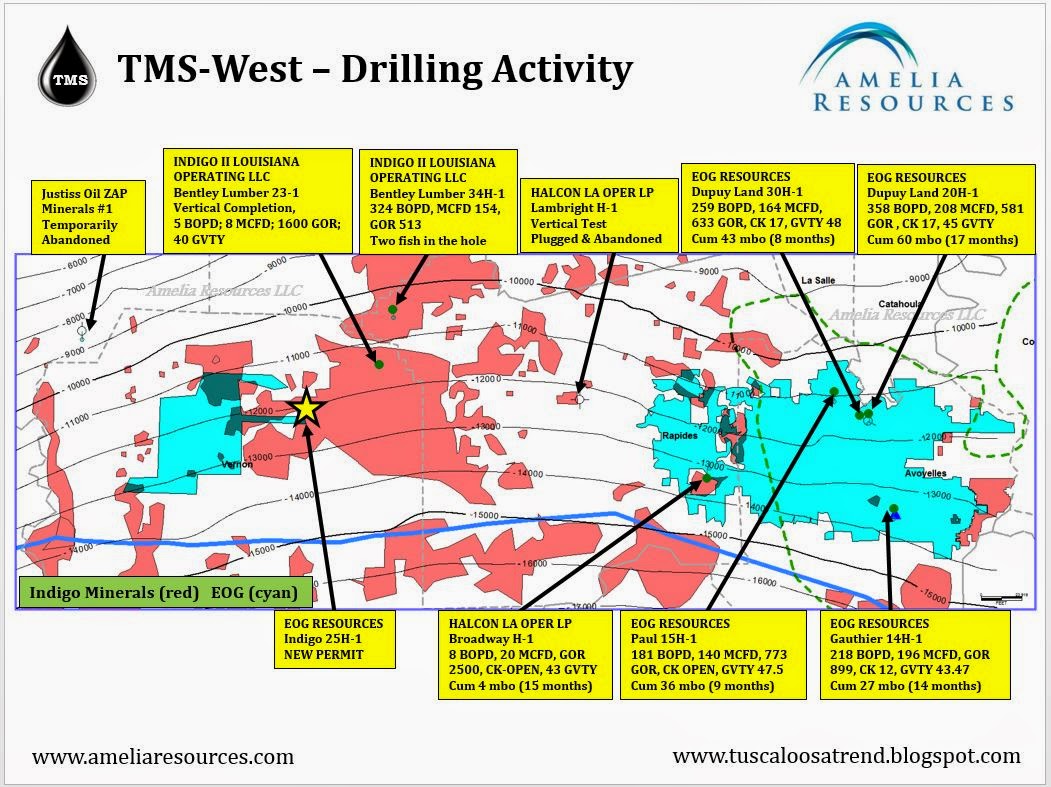 Posted by Kirk Barrell at 2:00 PM No comments:

Goodrich announced excellent results for the Lewis 30-19H-1 well today. The well achieved a peak 24-hour average production rate to date of 1,450 barrels of oil equivalent ("BOE") per day, comprised of 1,387 barrels of oil and 377 Mcf of gas on a 16/64 inch choke from an approximate 6,600 foot lateral. The well landed in the Company's lower target and was completed with 26 frac stages.
Entire press release

In my last post, I provided some predictions based on two factors: boepd/1000' and boepd per stage. The estimates were 12% above the reported rate.  I've updated the charts below to include the latest well. The Lewis 30-19H-1 has an above average factor in both cases.
Congrats to Goodrich for another outstanding TMS well. 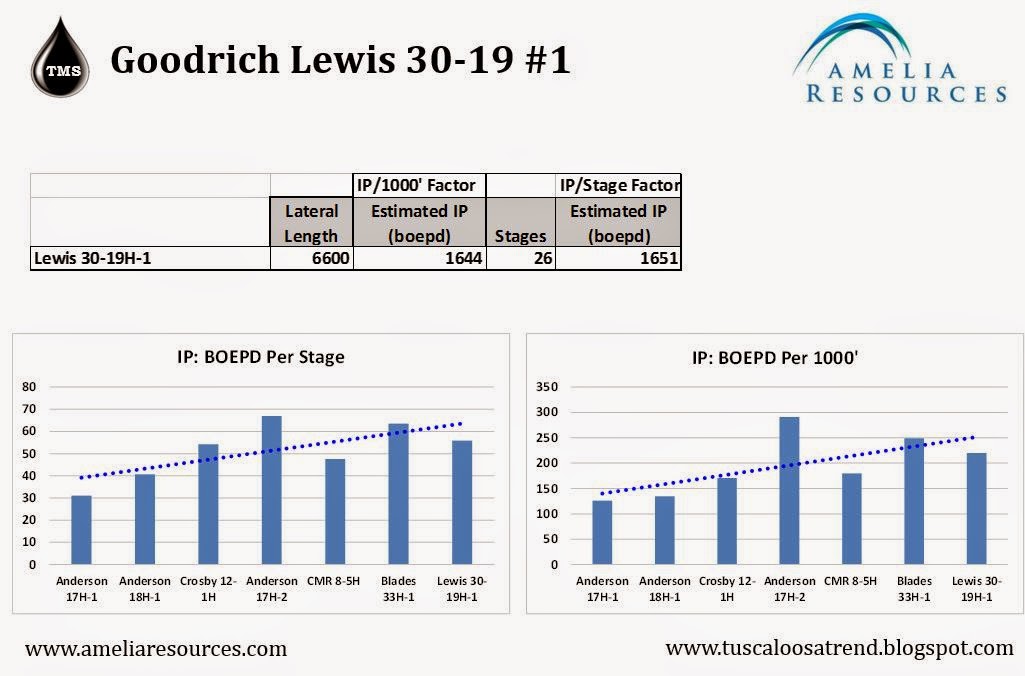