Posted by Kirk Barrell at 7:55 AM No comments:

Field reports from Central Louisiana indicate that EOG has moved in a H&P rig and has spud the Indigo 25H #1 TMS well (API 1711520230) located in Section 25, T3N-R7W in Northeast Vernon Parish, LA. According to a filed permit with the state, the well will have a measured total depth of 17,318’ which may imply a 5,000’ to 6,000’ lateral in the objective TMS section. By virtue of the well name, it appears that Indigo Minerals is a partner in the well. Indigo has been active in the West side of the TMS play since 2010 acquiring leasehold along with its large fee mineral position, and drilled one horizontal TMS well in 2011 that was junked due to fish stuck in the lateral. From previous land maps presented in the area, it appears EOG also has a significant acreage position in the Vernon Parish, LA area. This will mark EOG’s 5th TMS well in the play with the other 4 TMS producers located back to the East in Avoyelles Parish, LA. This new Indigo Minerals 25H #1 well will be very significant for "proving up" the TMS West. Good luck EOG and Indigo! 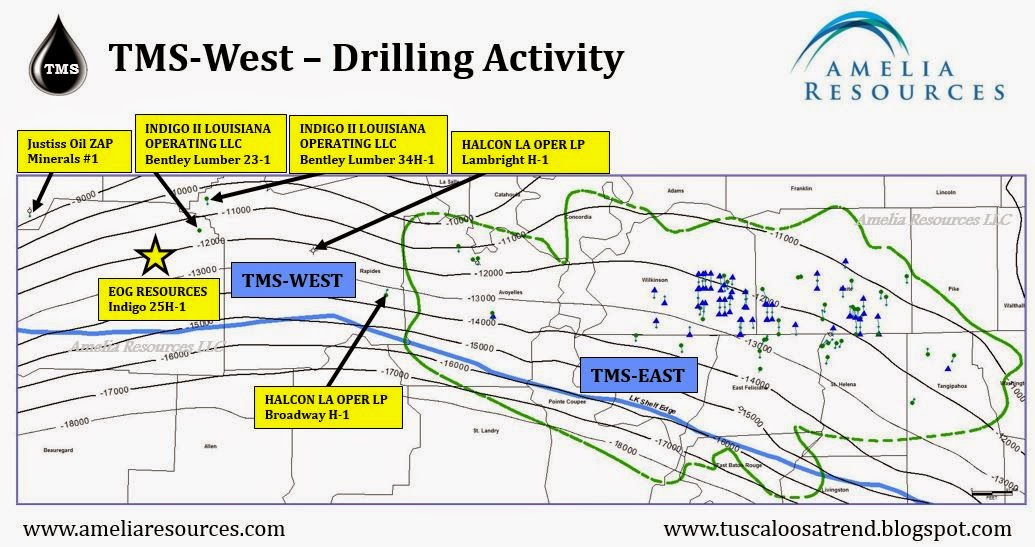 Posted by Kirk Barrell at 4:47 AM No comments:

Goodrich did an excellent job yesterday providing an update on their operations in the play. As in prior calls, they provided great detail on their current interpretation of the play.  I don't disagree with any statements that were made regarding the geological and reservoir aspects of the play.

My recent post regarding "geology matters" was timely.  The significance of porosity and natural fractures is starting to reveal itself.  As mentioned during many presentations, resistivity is not the only variable to evaluate.  I posted a white paper on resistivity a couple of years ago. It might provide some interesting insight. Acquiring leases based on a resistivity isopach map and a mudlog show might prove to be problematic.  The porosity provides storage and the natural fractures provide a mechanism for rapid production of the oil.  It's very likely that the "less fractured" TMS will require a different frac design to achieve economic results.  The mega-frac used on some prior wells with proppant ranging from 700-1000k lbs per stage might be worth trying on this different rock type.  Ultimately, as stated yesterday by Goodrich, the less naturally fractured rock type might present flatter declines and very attractive EUR's and IRR's.  With only 42 completions to date in the play, many more details will be revealed in the future. Keep in mind, that the Eagle Ford play was at 42 completions in 2009. Look what has happened there since then.

I'm currently working on a new white paper addressing this "rock type" theory.  Recent results indicate that there potentially are two "rock types" exhibiting different properties. Both will likely yield attractive economics.  Frac designs will be different for each. The reservoir attributes change gradually presenting a spectrum across the two rock types.  Below is a teaser of details to come in the next few days.  The current theory that depth and porosity/fractures are related is wrong.  With few TMS horizontals drilled to date, it's easy to "connect the dots" based on the current well dataset. Don't forget that there are hundreds of wells that drilled through the TMS over the past thirty years. Those well logs provide a robust dataset to map the reservoir attributes of the TMS.  It's my belief that to succeed across the TMS, you have to understand the distribution of the "silty facies" which impacts porosity and natural fractures.

The data below illustrates that "Crosby-like" log parameters exist across all depths and below 16000' TVD in some areas. Understanding the spatial distribution of the silty facies will be key.


Here are my takeaways from the call (my comments in CAPS):
DRILLING ACTIVITY
-44 completions; 12 drilling/completing
-delineation wells: SLC, B-Grove, Nunnery
-rubble zone: drill through at steeper angle has become the best practice next series
-Current Drilling: CMR 31-22, CMR 24-13, Spears 31-6, Denkmann; in derisked fairway; developmental wells; Bates pushing northern edge; plan to accelerate development
-depth limit for costs? depth not huge driver; 1000-2000' vertical is not big issue, few days in drilling time; BHP takes more horsepower and pump pressure to get frac off; not tremendous higher expense; no portion of the play is going to be materially more or less expensive; get wells down vertically quickly; deeper requires more horsepower; pad drilling will be the key to costs
-Crosby to Blades: derisked fairway
-Bates: last delineation; sufficiently thick, thicker than Nunnery;
-Bramlette well in early 2015
-Eastern block (Blades area): 3 permits in the queue; 3 spud in 2014 near Blades; Blades good 60-90 day production; two rigs simultaneous at one point in the area
KB:
-WITH ONLY 44 COMPLETIONS WE COMPARE TO THE EAGLE FORD PLAY IN 2009; VERY EARLY IN THE R&D PROCESS; WALL STREET WANTS 2014 EAGLE FORD LEVEL RESULTS; NOT REALISTIC
-DELINEATION WELLS HAVE PROVIDED NEW DATA TO CALIBRATE TO THE EXISTING LOG ANALYSIS; PATTERNS ARE STARTING TO EMERGE
-DEPTH: DATA INDICATES THAT "CROSBY-LIKE" POROSITY AND NATURAL FRACTURES OCCUR AT DEPTHS EXCEEDING 16000'; DEPTH AND POROSITY-NATURAL FRACTURES DO NOT HAVE A LINEAR RELATIONSHIP
-DRILLING DEEPER: WITH HIGHER PRESSURES IN THE DEEPER AREAS, SHORTER LATERALS MIGHT BE AS PROLIFIC AND ULTIMATELY THE SAME COST OR CHEAPER
-IF I WERE A PUBLIC COMPANY, I WOULD ALSO FOCUS ON THE DE-RISKED AREA OF THE PLAY FOR THE NEXT SIX MONTHS; WALL STREET NEEDS TO EXPAND THEIR HORIZONS PAST ONE QUARTER AND ONE WELL.
-BATES: 104' THICK; SHOULD YIELD AN ATTRACTIVE RESULT; -10950 TVD-SS WILL PROVIDE ANOTHER SHALLOW RESULT PROVIDING MORE PRESSURE AND WATER PRODUCTION DETAILS

GEOLOGY
-showing variability: rock properties important; better perm increased fracs = better performance
-east-west: 10500-14000' tvd - most prolific; cover 90% of GDP acreage
-will see variability; variability in first 45 days due to fractures
-natural fractures vs depth: B-Grove and SLC not as much natural fracturing based on drilling
-1200-1500 initial rates are probably due to more natural fractures; -geologic data presents no difference in rock properties including SLC and B-Grove
-depth is an open question as this point
-any way to map natural fractures? difficult; have been working with Schlumberger to run logs that analyze fractures; have been doing some work regarding fracture identification;
-3D seismic in planning, not sure if it will have resolution to see fractures; frequent in occurrence (1 every 1.5-2';see on schlumberger log); vertical in nature; contained within TMS section); will be trial and error; possible build frac model with logs through time
-Isopach map: it is important; where the thickness cutoff is; Nunnery thinner, IP less, possibly due to thickness; substantially thick in SLC and BG, plenty of thickness, comes back to matrix por/perm coupled with natural fractures; trial and error; drawing bullseye considered more "core in nature"; overlay porosity with resistivity (Passey)
-thickness has bearing on EUR, predicated on matrix performance; high IPs driven by natural fractures
-GOR surprise that not more gassy? not seen anything yet suggesting gas phase to play; Lane: conventional core RO slightly higher thermal maturity; see more gas down there, way up in black crude oil; entire play way up in % of black crude oil
KB:
-MY UPCOMING WHITE PAPER WILL ADDRESS ALL OF THIS
-THE GOR IN THE SLC, BEECH GROVE, AND WEYERHAEUSER 51H ARE ALL ANOMALOUSLY LOW. THERE APPEARS TO BE SOME RELATIONSHIP BETWEEN ROCK TYPE AND GOR.


The project has 20 wells in play either drilling, completing, or flowing back. I would expect to get three official well results on Thursday during Goodrich's earnings call. 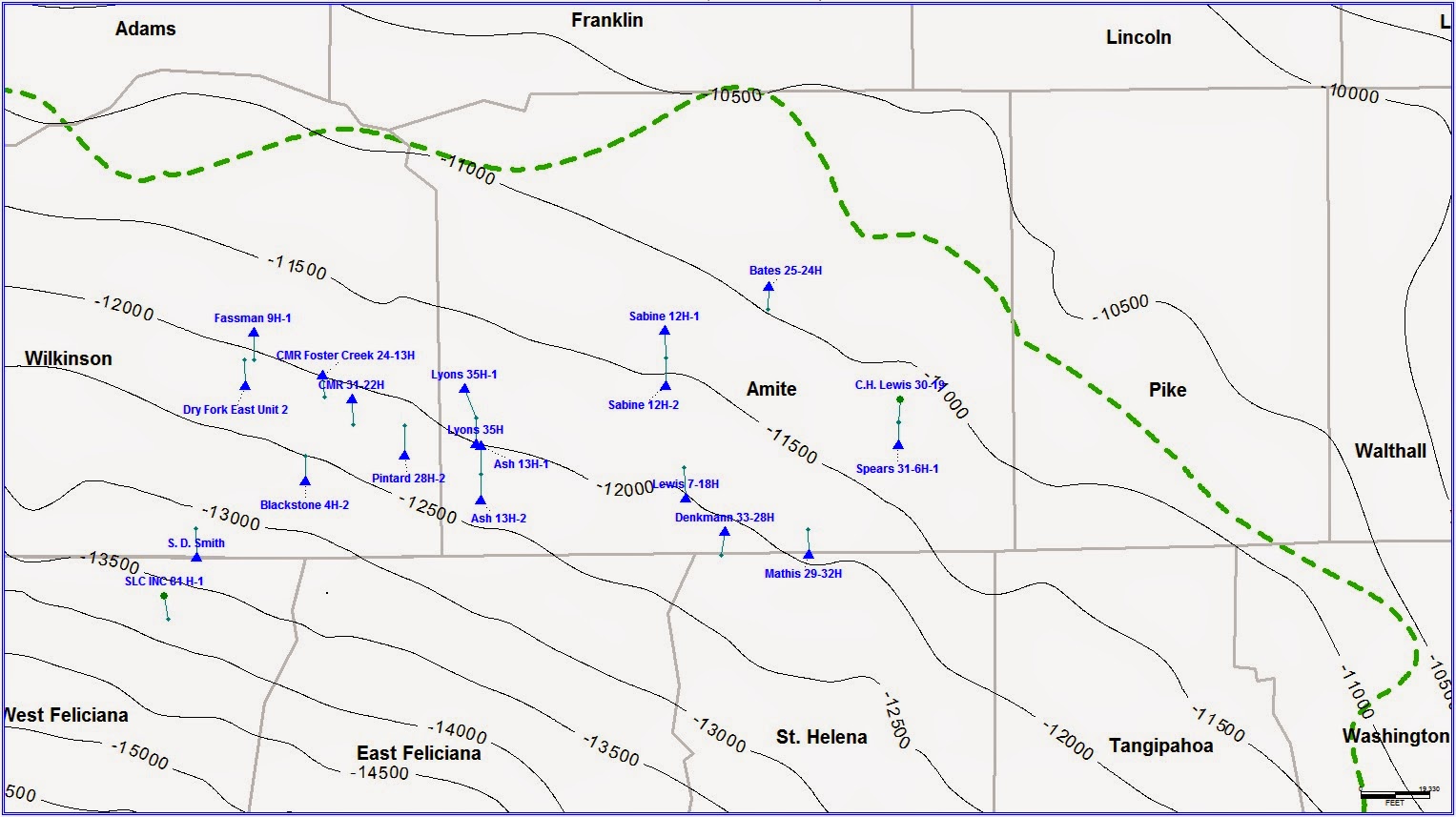 Halcon had their earnings call yesterday. Here are my takeaways:
-DRILLING: 2 rigs in TMS; drilling days reducing 15-20%; all operators expected to increase rig counts; 50 wells drilled so far; last 10 mostly good; Blackstone 4H-2: 22 stages all frac-ed well; in clean out process and we'll start flow back here; get the cost down within 2 years from where they are down to that under $12 million range
-COMPLETION: tight range of frac job volumes of proppant and water being used; everyone's following fairly similar programs and you're going to see more comparable results across the industry going forward; it's a tough nut to crack down here, but we expect to significantly reduced cost over a couple of years
-PRODUCTION: performing to expectations; type curve remain exactly where they've been
-RESERVOIR: just record 200 feet of continuous conventional core in the Smith well; about 10 cores taken in last 3 years; got fantastic data in the Smith well, in the core, and all the modern suite of logs we ran in. That well maps out as being having one of the highest original oil in place of any well in the whole play
-FACILITIES: expect to build first compression nat-gas facility next year; building a 3-phase gathering system in centralized gathering facilities; plan to build a crude oil handling facility at the Port of Natchez in Mississippi
-LAND/LEASE:  acreage is pretty tight in the TMS, and we have so much that it would be like gluttony to just to think we have to have more.
-FINANCIAL: signed agreement with Apollo Global management, which may invest up to $400 million in our wholly-owned subsidiary, HK TMS.

SOURCE:
http://seekingalpha.com/article/2367725-halcon-resources-hk-ceo-floyd-wilson-on-q2-2014-results-earnings-call-transcript
Posted by Kirk Barrell at 9:50 AM 2 comments: