The Speculators Have Arrived 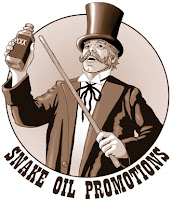 It's usually a positive sign when the speculators appear in a play.  That means that the play has reached some sort of "critical mass".  Recent announcements by Devon and Denbury appear to have excited the speculating crowd.  Landowners have recently been receiving higher offers from new parties who don't appear to be representing large oil companies.  A word to the "wise" landowner.  While most landowners focus on the bonus and royalty amount, don't forget that an experienced, well capitalized company could also drill some wells on your land that might provide monthly income for years to come.  Shale plays are costly and require a significant amount of capital to develop.  Beware of the "snake oil salesman" promising a few more dollars per acre.  They have arrived in the TMS with "product in hand".
Posted by Kirk Barrell at 6:53 AM 5 comments:

Indigo Minerals has posted a map on their website that presents their acreage position in the western portion of the Tuscaloosa Marine Shale Play:
http://www.indigominerals.com/property/Webslideshow5.pdf
Posted by Kirk Barrell at 2:18 PM No comments:

Three companies (Trexas Gas, Alerion Gas, and Anderson Oil) assigned their leases to Goodrich Petroleum Corporation today.  These lessors hold a significant amount of acreage throughout St. Helena, Tangipahoa, and Washington parishes.  The original leases are dated from late 2008 and to early 2009.
Posted by Kirk Barrell at 11:35 AM No comments:

Five new wells targeting the Austin Chalk have been permitted in the past few weeks.  The focus area appears to be near the intersection of Avoyelles, St. Landry, and Pointe Coupee Parishes. 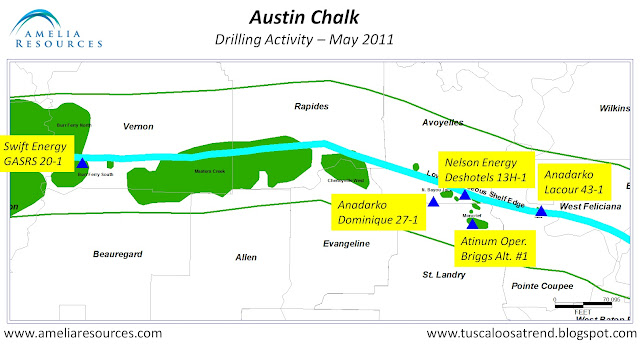 Indigo Minerals announced their 2nd Tuscaloosa Marine Shale well today.  The well, Bentley Lumber 23H #1, is located in section 23, T5N-R5W, Rapides Parish, Louisiana.  It is permitted to a proposed total measured depth of 15,500' and is projected to include a 4,000' horizontal lateral section targeting the Tuscaloosa Marine Shale (they call Eagle Ford) at approximately 10,600' true vertical depth.  They state that the well is anticipated to be completed through the horizontal segment with 15 fracture stimulation stages. 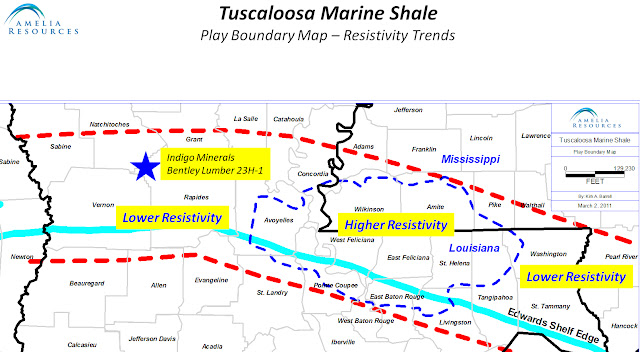 Denbury provided an update in their earnings conference call today.

"We acquired approximately 200,000 acres of leases in Mississippi and Louisiana with short lease expirations through our Encore acquisition. Encore has spent a conservative amount of capital and time testing the Tuscaloosa marine shale, which resulted and the only Tuscaloosa marine shales with continuous production to date. Given our planned activity in our CO2 EOR operations in the Bakken and the relatively short period of time before leases were going to expire, we decided to seek a joint venture partner to continue testing the Tuscaloosa marine shale. We have entered into an agreement with a joint venture partner covering approximately 100,000 acres of the Tuscaloosa marine shale acreage that had not yet expired. Under this agreement, the joint venture partner provided immediate capital to extend expiring leases, has a right to elect to complete a well that was never completed, drill and complete one additional well, and to carry us in additional leak -- lease acquisitions until such time as an agreed-upon amount of capital is invested. After the joint venture partner has expended the agreed-upon capital by completing the one well, drilling an additional well and/or acquiring additional leases, Denbury will have the opportunity to participate for 15% working interest in all future drilling on a unit-by-unit election. Prior to the expenditures of the agreed-upon capital, Denbury will be carried for a 15% interest in all operations or lease acquisitions. This transaction does not include Denbury's Tuscaloosa marine shale interest under any of our existing CO2 properties in Southwest Mississippi or Louisiana. And with that, I'll turn it over to Bob to talk about operations."

Conference Call Transcript:
http://seekingalpha.com/article/268201-denbury-resources-ceo-discusses-q1-2011-results-earnings-call-transcript
The well referenced above "to be completed" is very likely the Encore Board of Education 1H.  The well was drilled in August, 2008, but was never completed.  It was drilled to a measured depth of 15230 with a lateral length of 3814'.


This map depicts an approximation of Encore's original lease position in the TMS.  Much of the acreage has expired.
﻿﻿﻿
﻿
Posted by Kirk Barrell at 6:16 AM 2 comments:

Today in Devon's Q1-2011 Corporate Earnings Conference Call they announced their position in the Tuscaloosa Marine Shale Play.  The highlights were:

· The TMS is the stratigraphical equivalent to the Eagle Ford Shale
· The TMS is approximately 200 to 400 feet thick, at depths of 11,000 to 14,000 feet across the acreage position
· Oil production has been established, up dip in the play from the TMS
· They plan to utilize horizontal drilling and fracture stimulation to enhance the productivity of the reservoir in both the oil and liquids rich portion of the play.
· They have leased or have committed under contract approximately 250,000 prospective net acres, at an average cost of $180 per acre.
· They plan to drill the first two horizontal wells in the play this year.
· This is a frontier play
· The TMS is deeper than Eagle Ford Shale
· There have been some vertical wells drilled in there that indicate that indicate good porosity and permeability. And they’re also seeing some silt and carbonates, which indicate that it may be somewhat brittle and able to be fractured.
· IPs on the vertical wells have been seen up to 300-barrels per day.
· A very small number of horizontal wells have been drilled a couple or three years ago and they were of limited horizontal length, on the order of 1500 to 2000 foot with only three stages, but they tested up to 500-barrels per day from these very limited and minimally fracked wells.
· All of these give them reason for encouragement.
· It's very early on, and they will start drilling horizontal wells, and need more data on rock frac-ability.
· There are some sands below that are wet; need to stay away from those.
· Need to get more information on the phase, oil and natural gas, because there just aren't that many wells defining those boundaries.
· There are some risks associated with the play
· The play has encouraging qualities
· Established a 250,000 acres position for less than $50 million.
· If successful, they  will create a lot of value.
· Rig out there in the second quarter.
· Obviously, the first wells will be more science wells; not going to have the efficiencies that will have in later wells.
· Eventually the $12 million range is somewhere where they will be looking at drilling and completion costs.
Audio of the conference call:
http://edge.media-server.com/m/em/qx6bm9yp/r/1/lan/en

The Baton Rouge Advocate published another article yesterday relating to the Tuscaloosa Marine Shale.  The article mostly focuses on the benefits and risks of the hydraulic fracturing process.

http://www.2theadvocate.com/news/Planned-drilling-targets-BR-area-shale-deposits.html
Posted by Kirk Barrell at 12:08 PM No comments: