Encana permitted their 1st TMS well in Louisiana.  The permit indicates a 6738' lateral.

Posted by Kirk Barrell at 7:09 PM No comments:

The Motley Fool chimes in on the TMS.  Is Cramer next?


THE PENNY STOCK OF SHALE PLAYS
Adam J. Crawford
June 14, 2011
Like moths to a flame, drillers are dialed in on a new potentially oil-rich formation named the Tuscaloosa Marine shale.  Attempts to tap the Tuscaloosa have failed in the past, but with new drilling techniques, this time around may be different. And with the low cost of land, the high price of oil, and the estimated 7 billion barrels of oil in the region, many energy companies consider the project a risk worth taking.
Tapping the Tuscaloosa
Devon Energy (NYSE: DVN  ) compares the Tuscaloosa to the highly targeted Eagle Ford shale. The company established a 250,000-net-acre position in the region, with plans to drill two wells later this year. Now, other companies are following suit.
Through a joint venture, Denbury Resources (NYSE: DNR  ) is making plans for at least two wells on its 105,000 acres in the Tuscaloosa shale. In addition, Denbury is also a prominent player in the oil-rich Bakken shale.
Goodrich Petroleum (NYSE: GDP  ) recently acquired 74,000 acres for $13 million in the oil-rich formation. Goodrich expects to begin development on the land early next year. The move was enough to prompt one analyst to upgrade the stock, regardless of the company's less-than-stellar fundamentals.
Weyerhaeuser (NYSE: WY  ) isn't in the oil game, but the forest products company owns 65,000 acres in the region. The company is searching for an operator to develop the land. As an interesting side note, legendary investor John Paulson recently took a sizable position in the company.
Swift Energy (NYSE: SFY  ) also owns acreage in the region, but as of now, it's taking a "wait and watch" approach before proceeding to drill.
The bottom line
In investing parlance, the Tuscaloosa Marine shale could be considered the penny stock of shale plays. The potential is great, but so is the risk. Be on the lookout for positive developments in this region, and look to invest in companies that will benefit.
http://www.fool.com/investing/general/2011/06/14/the-penny-stock-of-shale-plays.aspx
Posted by Kirk Barrell at 6:27 AM No comments:

By my correlation and estimate, it appears that the well has drilled through the Tuscaloosa Marine Shale.  While not reported, I would assume that a conventional core was taken. 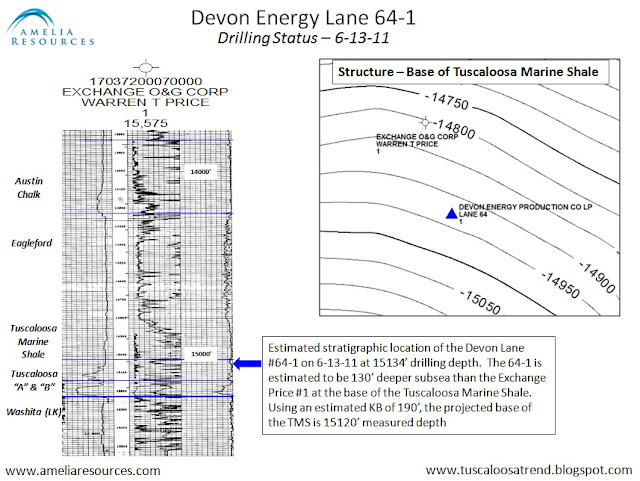 Posted by Kirk Barrell at 10:53 AM No comments: 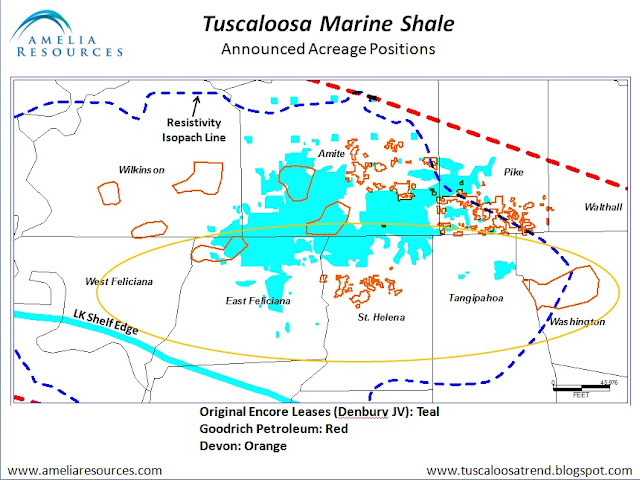 Alfred C. Moore, a Mississippi wildcatter & geophysical engineer, worked up the first regional project targeting the Tuscaloosa Marine Shale, beginning in 1969.  A former Sun Oil geophysical engineer, Moore sold it to colleagues at Sun Oil in 1970 for $25,000.  Moore had worked for Sun in the 1940-50’s, and partnered with them in Lower Tuscaloosa sand wells drilled in the McComb field area during the 1950-60’s. He later called the project, “The South Slope Project”, in comparison to Alaska’s North Slope discovery of the day, and speculated of a nearly 50 billion barrel in-place resource.  Moore chronicled TMS shows in over 50 area wells throughout the 1950-60’s.   In late 1971, Sun Oil drilled the Sun #1 Spinks well in Pike County, MS, coring over 310’ of the TMS at Moore’s urging. It was subsequently plugged as non-commercial, after perforating just 24’ of TMS and fracking with 30,000 lb. of sand & gelled diesel oil at up to 6,200 psi. Conventional core revealed silt inclusions, crossbedding and fracturing with heavy oil shows, and more than forty percent of the core had fractures. Undaunted, Moore then sold the project to Callon Petroleum in 1972, who partnered with Middle South Utilities’s System Fuels, in funding the next leasing and drilling effort.  The partnership drilled the Callon #1 Cutrer well in Tangipahoa Parish in late 1974, which was eventually junked and abandoned after running an uncemented liner through the TMS. In early 1975, they then drilled and cored 120’ of the TMS in the Callon #2 Cutrer well, which they fracked and produced from 60’ of TMS perforations until 1991. This well was eventually plugged and abandoned, due to poor economics of the time. They fracked it with about about 80,000 lbs. of sand & gel oil, but the tubing ruptured at about 15,000#, causing the frac to screen out. During its lifetime, the well produced 2500 BO from the TMS. Permeabilities from the core ranged from .01-.06 millidarcies and porosities 2.3-8%. Moore then sold the project one last time, to Texas Pacific in 1977 who drilled the Texas Pacific #1 Blades well in late 1977, also in Tangipahoa Parish, but the TMS was not diamond cored. That well has produced 24 MBO from the TMS over the past 30 years from 134’ of perforations, and is still producing a few barrels per day. After four wells in 7 years, it would be more than a decade before another test targeted the TMS, and although Moore lived almost another 20 years, the partnership’s leaseblock of 10 year leases expired, and his grand vision of 1,000+ producing wells from the TMS was not to be realized during his lifetime.  Over a decade before horizontal drilling became practical, Moore had caused the drilling of four vertical wells targeting the TMS, and seen two wells put on production at non-commercial rates.

To review his TMS notes from 1976, click on the link:
http://ameliaresources.com/documents/tuscaloosatrend/Alfred%20Moore%20-%20TMS%20Post-Wells%20Summary%201976.pdf
Thanks to Clint Moore for assistance on his father’s early history in the play.
Posted by Kirk Barrell at 9:22 PM 6 comments:

"Goodrich Petroleum Corporation (NYSE:GDP - News) today announced it has purchased leases totaling approximately 74,000 net acres in the Tuscaloosa Marine Shale oil trend in Louisiana and Mississippi. The Company paid approximately $13 million, or an average of $175 per net acre for the acreage. The Company anticipates development to commence in the first quarter of 2012."
Source: PRNewswire
Entire presentation:
http://www.goodrichpetroleum.com/presentations/2011_06_10_GDP_EnerCom_London.pdf
Posted by Kirk Barrell at 9:23 AM 1 comment:

Word "on the ground" in Mississippi this morning is that the Haliburton trucks have arrived and are preparing for a frac job.  Stay tuned.
﻿﻿
﻿

Devon Energy's first two TMS locations align perfectly along dip, but differ in depth to reach the shale.  Thickness of high resistive shale, temperature, and pressure differ also.  Obviously, cost and risk will be greater at the deeper location.

Posted by Kirk Barrell at 4:20 AM No comments: