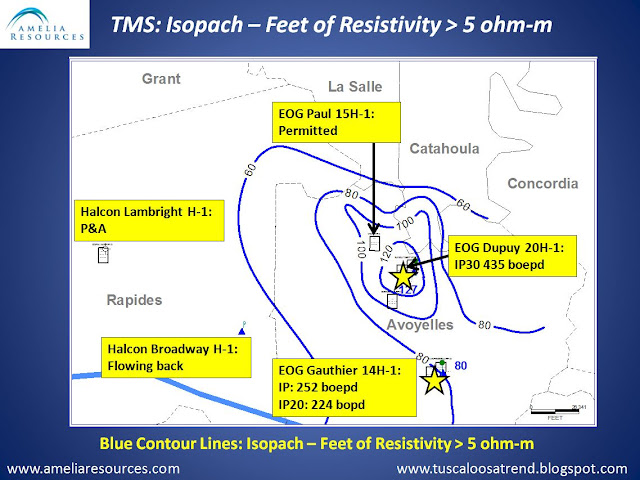 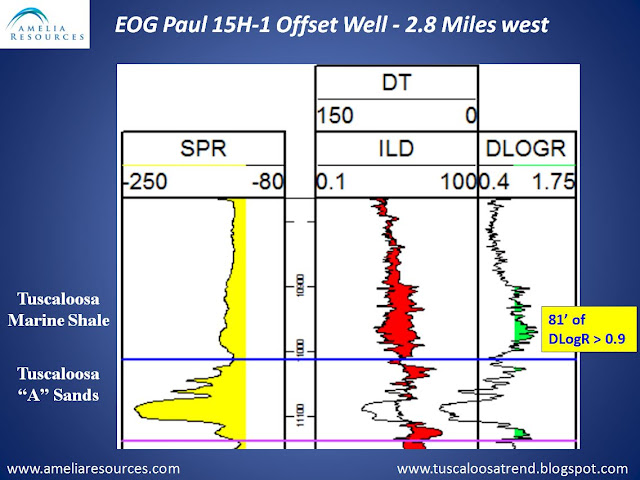 Posted by Kirk Barrell at 4:53 PM No comments:

Three results are now confirmed for wells on the Weyerhaeuser leases. I waited until I was able to confirm rates.  In the past, I've posted on the process regarding submitting initial potentials to the regulatory agencies.  Encana's initial potential posted on SONRIS for the Weyerhaeuser 60H-1 appears to be an early rate prior to clean up.  The 60H-2 appears accurate.


The charts below present updates on results compared to frac job parameters.  It's still a challenge to compare "apples to oranges", but key factors impacting results are landing zone location, proppant levels, fluid levels, and reservoir thickness and oil saturation.  The 60H wells indicate that the proppant volume has limits as predicted in a prior post.  The linear curve "rolled over" hard on these wells.  Once again, Devon gets a good result compared to the minimum about of proppant placed. The Weyerhaeuser 72H produced 336 bo with an average proppant of 124k/stage.  Would 500k/stage result in 1354 bopd?

The chart below compares the initial potential to the total number of stages.  Proppant volume is not considered in this comparison so it's "apples to oranges".  Overall, the four best results have been in wells with at least 24 stages.  For comparison purposes, I define the wells above the "best fit line" as underperform and those below to overperform.  Essentially the overperformers are getting more oil with less stages. 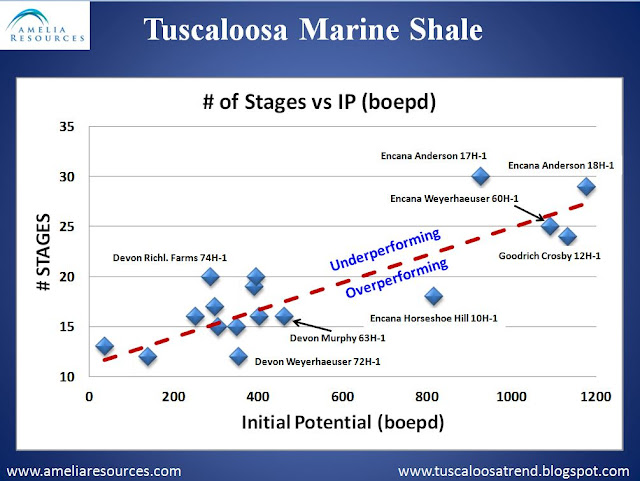 The chart below compares the total amount of proppant used to the initial potential.  The "best fit line" presents a comparison for well performance.  The 60H wells being the farthest displacement from the line indicate that they underperformed more than any other wells based on the amount of proppant placed.  In contrast, the Goodrich Crosby 12H-1 and the Encana Horseshoe Hill 10H-1 stand out as overperformers. 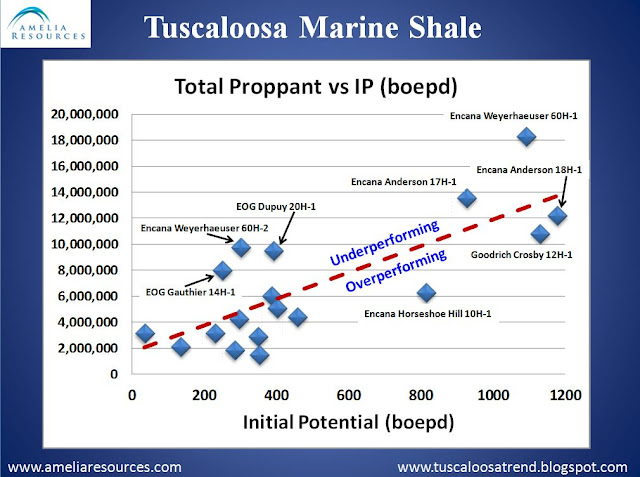 The chart below does align the wells based on the proppant per stage.  There is quite a bit of "scatter" around the "best fit line".  Encana's recent 60H wells illustrate that the extra proppant did not impact the initial potential rate.  Keep in mind, that the higher proppant levels could flatten the decline curve point forward which is important.  I used the "best fit line" to determine whether the well presented a good return on investment (ROI) based on the costs of the completion which is heavily impacted by the amount of stages and proppant.  Devon's Richland Farms 74H-1 had a great result when you factor in the 92k/stage of proppant.  The Goodrich Crosby 12H-1 and the Encana Horseshoe Hill 10H-1 stand out as excellent completion ROI's.  With 18 completions, the Crosby 12H-1 currently stands out as the "model well" for the play.  This well indicates that proppant levels in the 425k/stage range can produce excellent results and economics.  With more results, completion costs can be confirmed allowing for predictable economic projections. 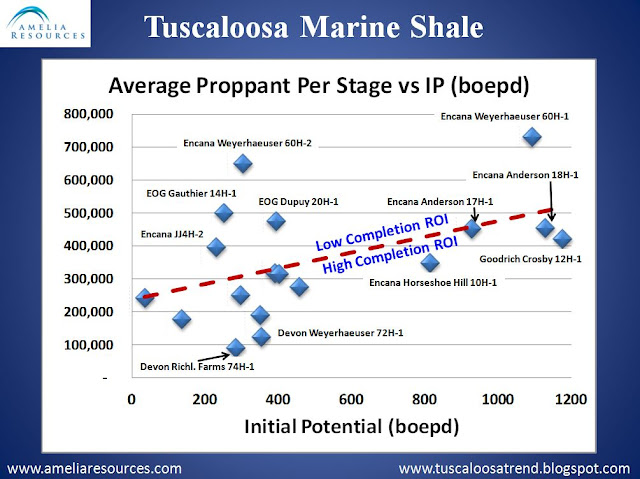 The Encana Ash wells also placed significant levels of proppant. Their landing zone was also higher in the section which could negatively impact the results.  These initial potentials should be out sometime next week.
Posted by Kirk Barrell at 2:10 PM 6 comments:

This result is very surprising.  I predicted an IP30 for the Gauthier of 665 boepd. With the 20 day average at 224 barrels of oil (not including gas), I'm likely to be quite a ways off on my estimate.  Porosity or sonic logs have not been released for either the Dupuy 20H-1 or the Gauthier 14H-1, but the cross section below presents the gamma ray and deep induction logs.  While the Gauthier had less "high resistivity", I believed that the increase in depth and more southern position would result in an improved rate due to higher pressure, more gas, and more calcite.  Interesting enough, the oil gravity of the two wells is almost the same. 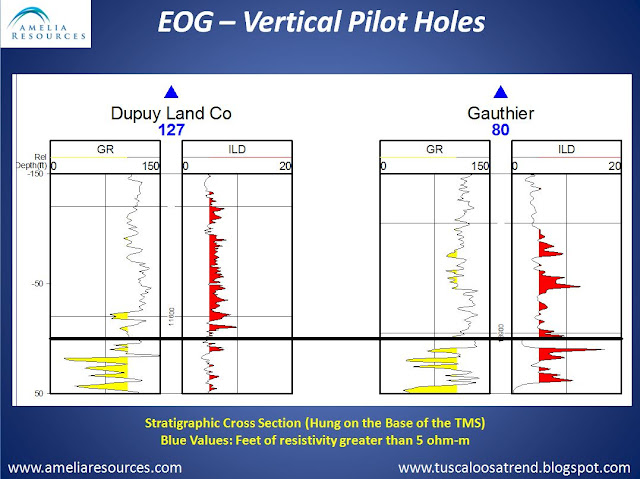 The map below presents an isopach on the "feet of TMS resistivity > 5 ohm-m".  As I've stated many times, the Passey "Delta-Log-R" is a much better parameter to map because it includes porosity.  Since I don't have sonics on the two EOG wells, I've presented this map that provides control points for both EOG wells.  The Dupuy, with 127' of resistivity, is anomalously thick for the local area.  The contours indicate a northwest-southeast trending "tongue".  As stated in my post last week, EOG might be defining the western boundary of the play.

Just west of the Dupuy well, historical vertical wells indicate a drop in resistivity thickness.  Halcon, on their earnings call last week, stated that the Broadway H-1 has 120' of pay.  Due to the lack of well control near that well, it's possible that another "thick" occurs.  Based on the well control that I've evaluated, I conclude that the results would be less than the EOG wells.  We'll see. 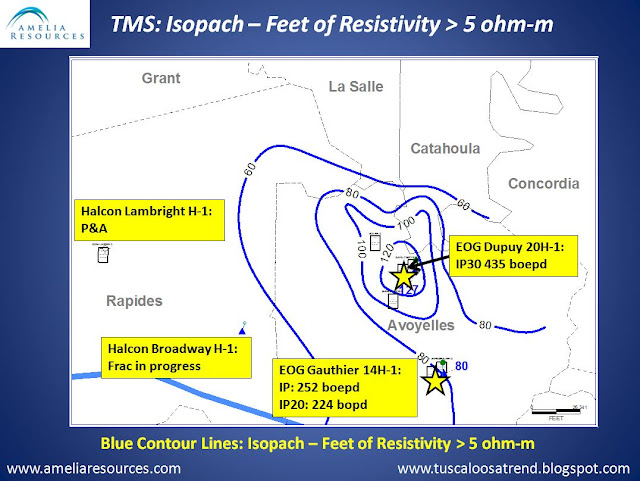