Cretaceous age TMS garnering attention
With the Shale Revolution changing the shape of the energy landscape, investors, operators, and service companies are all clamoring for information on emerging shale plays that could become "the next big thing." And while the definition of "emerging" is as liquid as the resources found in some of these plays, there are a number of areas to keep an eye on.
From the Cretaceous age, the same age as the once "emerging" and now wildly popular Eagle Ford Shale, the Tuscaloosa Marine Shale (TMS) covers an area of approximately 5,900 square miles across the Gulf Coast Region of Louisiana and Mississippi.
The TMS is found at depths that vary from 9,000 to 14,000 feet, with a formation thickness from 500 feet to over 800 ft.
The oil-prone formation of the TMS is comprised of gray and black shale, with sand present in some areas. A 1998 report by LSU’s Basin Research Institute estimated the 2.9-7.4 million acres prospective for the play may hold over 7 billion barrels of oil.
Devon, Encana, Goodrich Petroleum, EOG Resources, Halcon, and others have all established positions in the area. Combined, the independent operators have acquired over 2 million acres in the heart of the play, which thus far, appears to land at least in part, in and around Amite and Wilkinson Counties, Mississippi.
Play benchmarks for the TMS come mostly from Encana and Goodrich Petroleum, both actively involved in testing the commercial success of the play.
Twenty completion results and roughly a year of production data prompted single-well EURs of 600-800 Mboe (90% oil) predictions from both companies wells. In February 2013, Goodrich’s Crosby 12H‐1 well came on line in Wilkinson County with an initial potential of 1,300 Mboe and produced 60 Mboe (90% oil) in its first 60 days of production, while Encana’s Anderson 18H‐1 has produced 122 Mboe in 11 months.
EOG Resources drilled two wells in just over a month in the play and drilling of a third well is currently in progress.
Goodrich currently holds approximately 135,000 net acres in the TMS, acquired at an average price of roughly $225 per acre, and now expects to spend the higher end of its previously announced 2013 capital expenditure budget in the TMS of approximately $50 million. For Goodrich, single-well costs are already dropping, down $3 million from $13 million to $10 million.
A few advantages in the TMS include abundant water sources, long lateral lengths (up to 8900’ have been successfully drilled and completed), existing infrastructure and proximity to market, and an oil-friendly environment. Light Louisiana Sweet Crude pricing (+$20/bbl), lower royalties, and a recent tax cut from the state of Mississippi are all alluring.
Looking to draw an economic boost similar to what’s happening in North Dakota and Texas from the Bakken and Eagle Ford, respectively, Mississippi Governor Phil Bryant cut the tax rate from 6% to 1.3% for oil and gas extracted from qualified horizontally drilled wells for a period of 30 months or until the payout of the well.
The hope is to attract companies to what his office predicts will be one of the "most active shale plays in the United States."
The wells must be drilled between July 1, 2013 and June 30, 2018, and the lower tax rate also applies to oilfield service companies.
The tax cut is likely to draw interest, at the very least, and companies looking to test the waters in emerging shale plays are already taking action.
Commenting on the reduced tax rate in the company’s 1Q13 update, Clayton Woitas, Encana’s Interim president and CEO, said the program supports the pursuit of commerciality by positively impacting Encana’s economics for the play.
"With six wells producing in the TMS and two additional wells expected to begin production in the second quarter of 2013, the company is gaining confidence in the potential of the play as it nears commerciality," he continued.
The company has five gross wells on production and four being completed in the TMS and plans to run a one rig program in the first half of 2013 to continue its assessment of the play with additional wells. The focus is on reducing well costs and increasing productivity.
In addition to the TMS, as part of its focus in 2013, Encana is looking to prove commercial success in other emerging shale plays.
Entire article:
http://www.ogfj.com/articles/print/volume-10/issue-6/features/emerging-shale-plays.html

Posted by Kirk Barrell at 12:16 PM No comments:

MS Onshore LLC (believed to be Energy XXI) has added two additional units and wells to their Austin Chalk project. 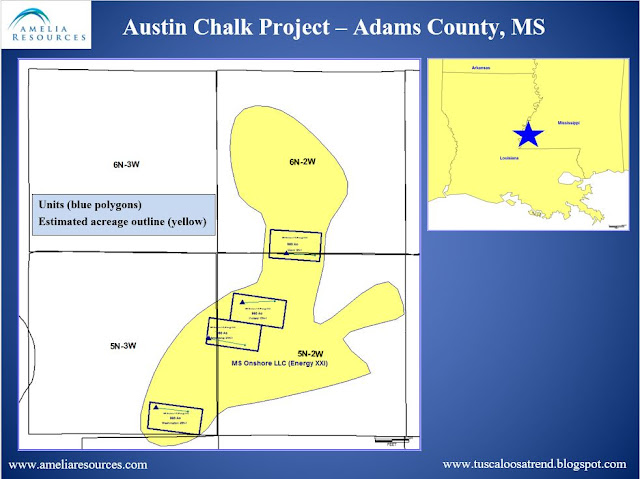 The TMS operators continue to improve on drilling time across the play.  EOG's Paul 15H-1 was drilled in 28 days when substracting out the time to drill the pilot hole.  That's "three in a row" for EOG in record time.  The Paul 15H-1 landed much lower in the TMS which confirms that rapid drilling can be achieved in the basal portion of shale in the highest TOC interval.  The Goodrich Smith 5-29H-1 is drilling on schedule as well. 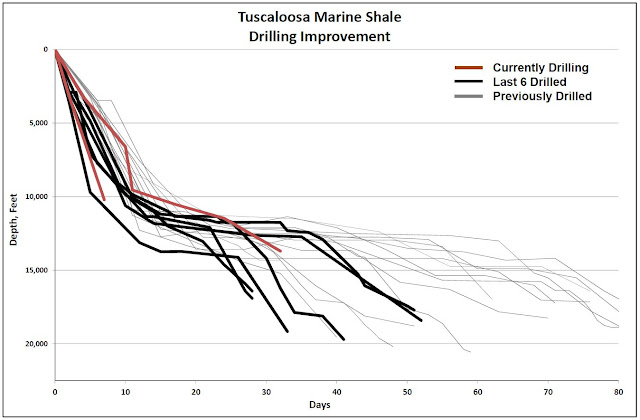 Posted by Kirk Barrell at 8:54 AM No comments:

An updated chart of cumulative production vs time reveals some impressive results for the TMS.  The Goodrich Crosby 12H-1 continues to "raise the bar" in the play.  With the upcoming completions modelling the frac design of the Crosby, it will be interesting to see the results.

Posted by Kirk Barrell at 8:53 AM No comments: