Goodrich announced this today for the Blades 33H-1 well in Tangipahoa Parish, LA:
"The well has achieved a peak 24-hour average production rate to date of 1,270 barrels of oil equivalent ("BOE") per day, comprised of 1,250 barrels of oil and 115 Mcf of gas on a 14/64 inch choke from an approximate 5,000 foot lateral. The well landed in the Company's lower target, was drilled and completed under budget and was fracked with 20 stages using composite plugs that were drilled out prior to flow back. The Company's completion methodology was slightly modified from previously completed wells. The well was drilled on a portion of the 185,000 net acres acquired in August 2013 and is approximately 48 miles southeast from the Company operated Crosby 12H-1 well in Wilkinson County, Mississippi and five miles east of a horizontal well previously drilled on the acquired acreage."
Source:
http://phx.corporate-ir.net/phoenix.zhtml?c=83169&p=irol-newsArticle&ID=1918134&highlight=

I believe that this is the most important initial test to date for this play and that it represents a significant milestone.  My reasons are as follows:
-Initial potential: while it's the 3rd highest initial rate, on a per 1000' basis it's only second the Encana's Anderson 17H-2.
-Location: the well is pushing the eastern economic boundary of the play and it represents a great anchor for the east side.  It confirms the large areal extent and consistency of this reservoir rock.  Stay tuned for the results for the Nunnery12H-1. This well is even closer to the play's economic limits.
-Pay thickness: with 94' of pay, the results align with expectations based on the thickness of high TOC rock.
http://tuscaloosatrend.blogspot.com/2014/04/goodrich-blades-33h-1-upcoming-result.html
-Devon: This well, along with many in the future, confirms that Devon did not pursue these completions correctly.  The financial quants still struggle with this fact.  It also confirms that Goodrich's acquisition was brilliant and strategic.
-The well was drilled under budget and much faster than prior attempts.  More improvements and cost reduction to come.
-The well landed in the lower 70' of the TMS and built the curve without encountering any issues. This is probably the most important data point. Drilling through the naturally fractured zone (NFZ) without incident is a huge leap forward for this play.
-The plugs were drilled out without any challenges.  Let's assume that this challenge is behind us.

On another note, drilling a 6600' lateral in the Lewis 30-19H-1 in 36 days is huge. This represents eight less days of drilling equating to approximately $800,000 of cost reduction.

Major congrats to the Goodrich team.  They have been under assault for the past year. Let's hope for many more of these in the near future. 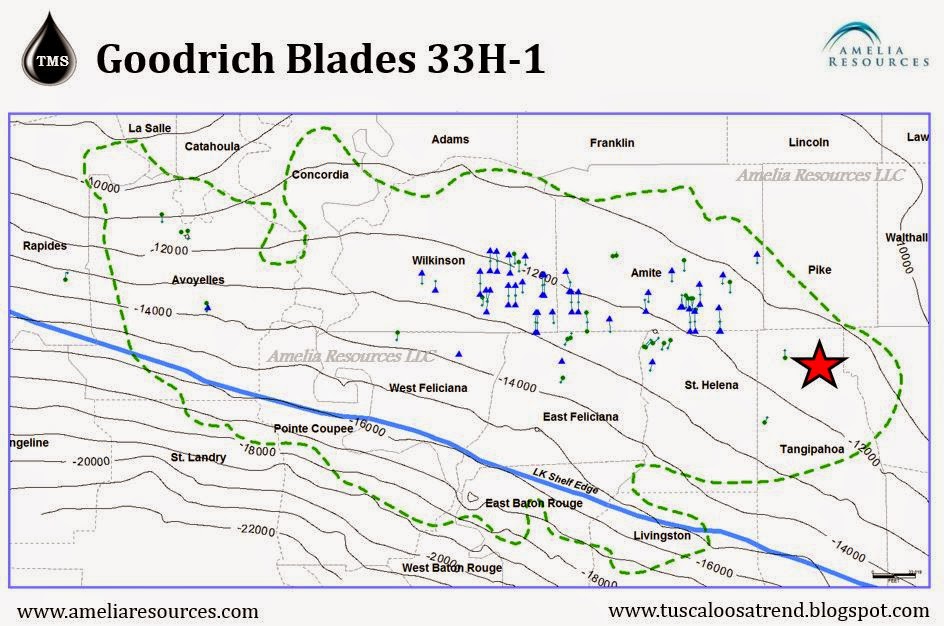 Here's my view on the play over the next two years:

There's been a lot of positive "chatter" about the Goodrich Blades 33H-1 well that is now flowing back oil.  Based on the vertical wells in the area, a good result is expected.  It appears that the drilling and completion went very well. The log below is from a well four miles west of the Blades 33H-1.  Calculated pay totals approximately 94'. That compares well to the Anderson area and less than the Crosby 12H-1 (122'). 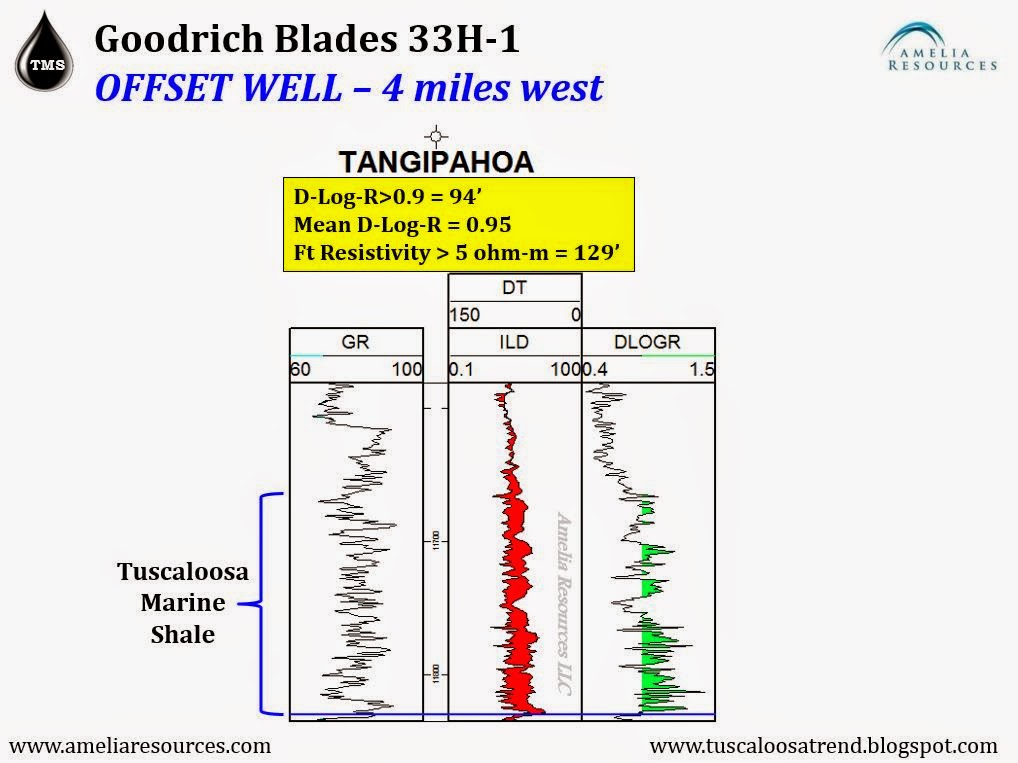 In November, 2010, as I commenced the "TMS Tour", these four obstacles were concerns of my target group of operators.  Here's my current perspective on each:

1.Too much clay
• Not an issue with regards to the producibility of this reservoir
• Clay increases vertically from the base of the TMS as you transition into deeper facies until reaching the maximum flooding surface (MFS).  The TMS high-TOC reservoir interval does not have a high percentage of swelling clay.
• Total clay and swelling clays have been confused
2.TOC is too low
• Range: 1-4
• Initial rates, produced volumes, and decline curves confirm that this is not an issue.
3.Hydraulic fracturing will “frac down” into the wet Tuscaloosa sands below
• Not aware of any well that has high water production indicating that this has occurred.
• Several pilot holes took conventional core below the TMS and confirm very high frac gradients.
4.Too expensive and uneconomic
• Final hurdle for the play
• Only 34 completions to date


• Would rather have mechanical challenges than reservoir rock challenges
Posted by Kirk Barrell at 11:07 AM No comments: 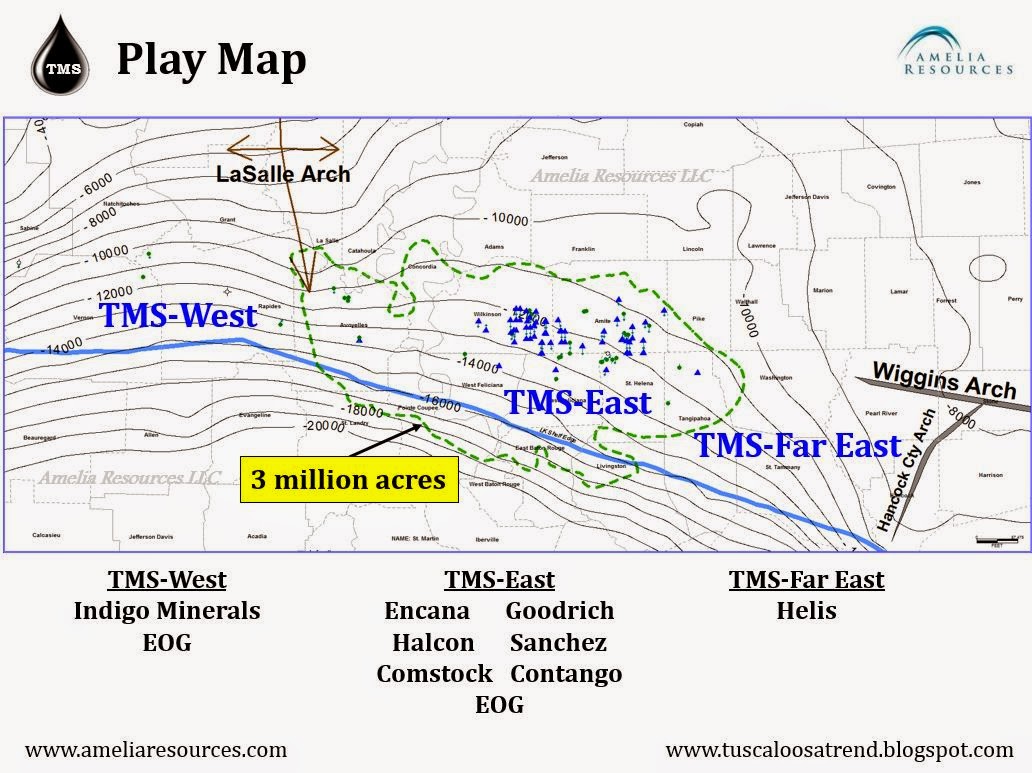