The first two charts below are in chronological order from left to right. The charts illustrate a continuous improvement in initial potentials both on a "per 1000' of lateral basis" and on a "per stage" basis.  That is very encouraging. The third and fourth charts indicate that more proppant is yielding better results, but prior wells have indicated that volumes greater than 700,000 pounds per stage is not advised. The "proppant per stage" presents a very tight correlation with the "IP per 1000 foot". This builds confidence for predicting future results. 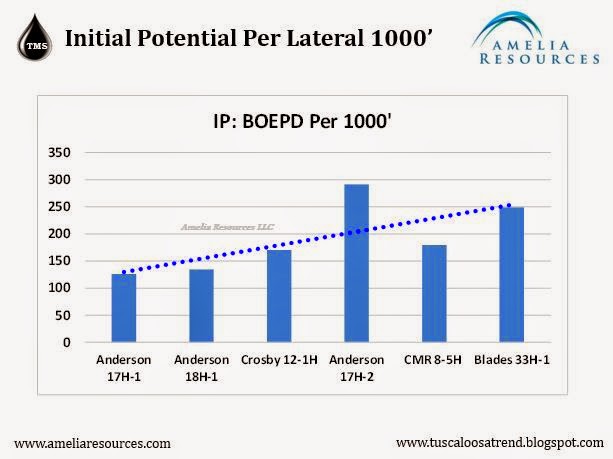 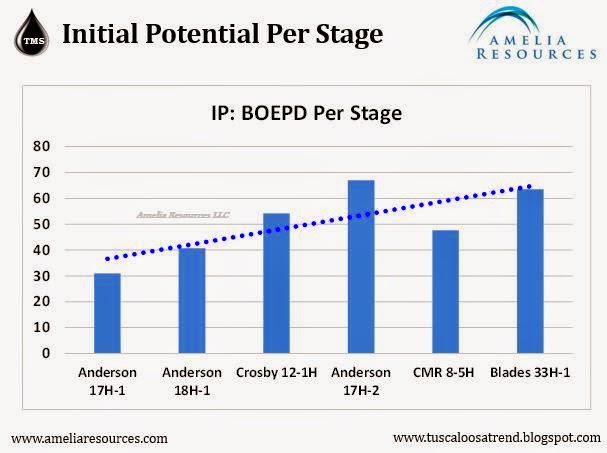 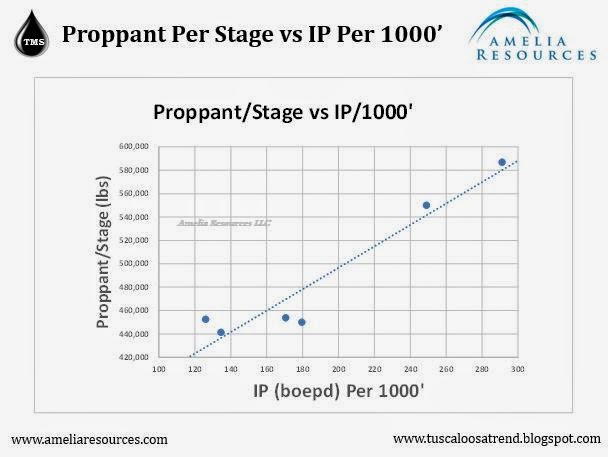 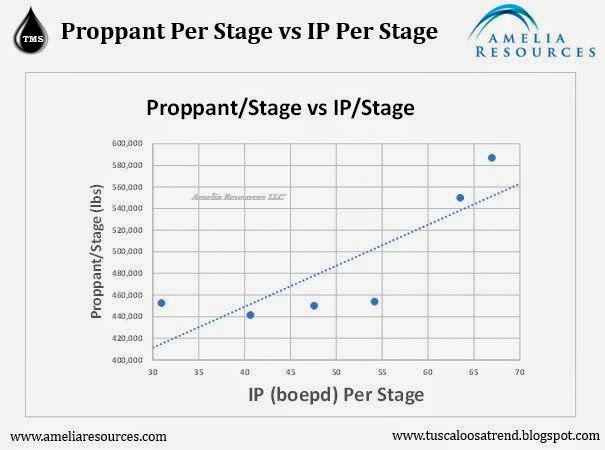 As we enter this next phase of the Tuscaloosa Marine Shale Play, it's interesting to look back to the beginning of this latest era.  The chart below displays key events in the play along with the cumulative wells drilled.  The play has recently crossed the 50 well threshold. 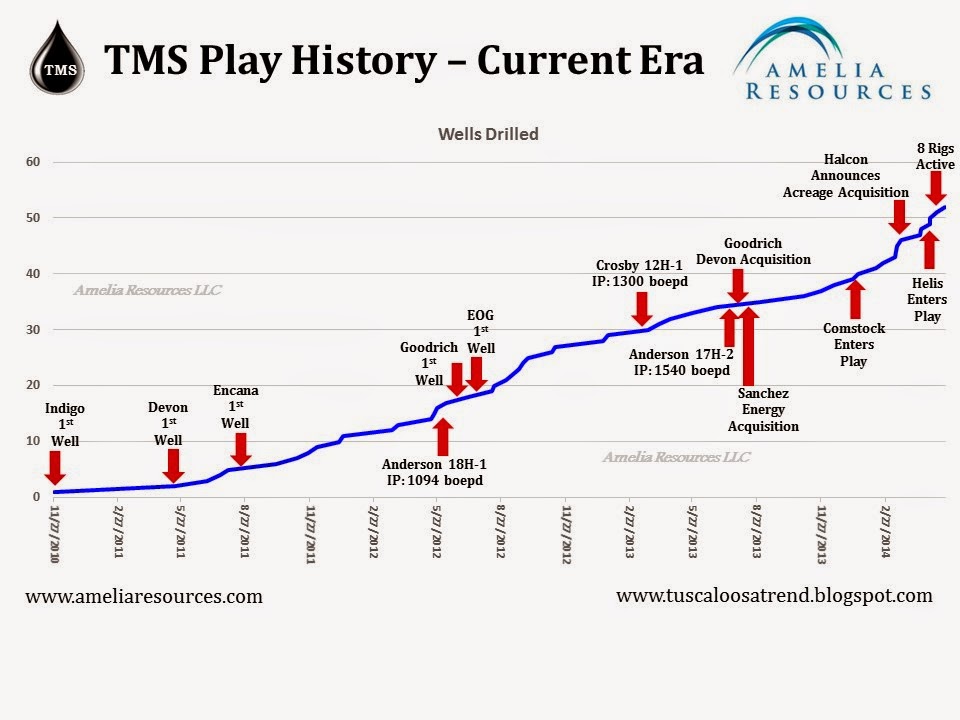 Posted by Kirk Barrell at 4:33 AM No comments:

There are currently 15 wells in "play" either about to spud, drilling, waiting on completion, fracking, or flowing back.  Many results will be announced over the coming weeks.


Posted by Kirk Barrell at 5:00 AM No comments:

I, along with Goodrich Petroleum, will be presenting at the Emerging Shales Conference next week in Houston. I look forward to visiting with many of you then.

Posted by Kirk Barrell at 9:27 AM No comments:

The TMS highlights from the Encana earnings call:

Posted by Kirk Barrell at 4:49 PM No comments:

“The initial potentials, production volumes, and decline curves indicate large recoverable reserves in the range of 400-900 MBOE. The play economics, consistency of the reservoir, and resulting reserves will make this a very competitive play for years to come.”

Amelia Resources announced today that it has been retained as a technical consultant to host a data room to market 138,000 net acres in the Tuscaloosa Marine Shale (TMS) play. The data room will open on May 19, 2014.
Amelia's President, Kirk Barrell, said, "Recent results have created a lot of interest in the TMS play. Drill times have greatly improved along with a decrease in associated costs. We’re excited to have the opportunity to market the only remaining large aggregate block of acreage in the play. We believe that the repeatability and economics of this play will be extremely competitive with other U.S. oil plays.”
With 23 years of experience across the Tuscaloosa Trend, the company has evaluated over 1,000 wells in the TMS across Louisiana, Mississippi, and Texas. Utilizing a diverse dataset of well logs, geochemistry, seismic, and petrophysics, the company has confirmed and defined the most economically attractive areas of the play.
Amelia’s clients have secured large acreage blocks spread across the heart of the play. Barrell stated, "The initial potentials, production volumes, and decline curves indicate large recoverable reserves in the range of 400-900 MBOE. The play economics, consistency of the reservoir, and resulting reserves will make this a very competitive play for years to come."
Amelia Resources LLC is a privately held exploration and production company. The company generates drilling prospects and is actively engaged in several projects across the onshore Gulf Coast. Amelia was founded in 2003 by Kirk Barrell and has offices in The Woodlands, Texas, 30 miles north of Houston. The company leverages its 27 years of geological and geophysical experience to obtain strategic positions in drilling projects. Updates on the TMS and Austin Chalk projects are provided by the company at www.tuscaloosatrend.blogspot.com.
CAUTIONARY STATEMENT: This press release contains certain forward-looking statements regarding various oil and gas discoveries, oil and gas exploration, development and production activities, anticipated and potential production and flow rates and the economic potential of properties. Accuracy of these forward-looking statements depends on assumptions about events that change over time and is thus susceptible to periodic change based on actual experience and new developments. Amelia Resources LLC cautions readers that it assumes no obligation to update or publicly release any revisions to the forward-looking statements in this press release and, except to the extent required by applicable law, does not intend to update or otherwise revise these statements more frequently than quarterly. Important factors that might cause future results to differ from these forward-looking statements include adverse conditions such as high temperature and pressure that could lead to mechanical failures or increased costs, variations in the market prices of oil and natural gas, drilling results, unanticipated fluctuations in flow rates of producing wells, oil and natural gas reserves expectations, the ability to satisfy future cash obligations and environmental costs, and other general exploration and development risks and hazards.

Halcon had their earnings call yesterday. Here are the highlights:
"We're looking for big ass results. I don't know what else to say."
Floyd Wilson, CEO, Halcon Resources


Entire Transcript:
http://seekingalpha.com/article/2203713-halcon-resources-hk-ceo-floyd-wilson-on-q1-2014-results-earnings-call-transcript?part=single
Posted by Kirk Barrell at 6:56 AM 1 comment:

The highlights from the transcript of the earnings call:

Posted by Kirk Barrell at 7:08 PM No comments:

Goodrich TMS Highlights:
-The Company is currently fracking its C.H. Lewis 30-19H-1 (81.4% WI) well in Amite County, Mississippi, which was drilled in 36 days and will have an approximate 6,600 foot lateral with 26 planned frac stages. The Company will use the same enhanced completion design of reduced frac intervals and additional proppant per stage as used on its last well drilled in the TMS;
- The Company has recently moved into completion operations on its Nunnery 12-1H #1 (94.1% WI) well in Amite County, Mississippi and its Beech Grove 94H #1 (66.7% WI) well in East Feliciana Parish, Louisiana, with plans to frac both wells in May;
-The Company is currently drilling its SLC, Inc. 81H-1 (66.7% WI) well in West Feliciana Parish, Louisiana and will commence drilling operations on its Bates 25-24H #1 (97.6% WI) and Denkmann 33-28H #2 (75% WI) wells in Amite County, Mississippi in the coming days.
Source:
http://phx.corporate-ir.net/phoenix.zhtml?c=83169&p=irol-newsArticle&ID=1927218&highlight=


Posted by Kirk Barrell at 7:15 AM No comments: