With new wells results from Encana, I've updated some production metrics below.


Posted by Kirk Barrell at 5:01 AM No comments:

The TMS play has reached the 84 well count with 71 producing, 12 drilling yet not completed (DUC), and 1 currently temporarily abandoned.

Posted by Kirk Barrell at 6:01 AM No comments:

I believe that the first "apples to apples" comparison on production can be made at the six month mark.  This provides time for each well to clean up and establish a decline curve.  The chart below presents the cumulative barrels of oil equivalent at 6,12, 18, and 24 month timeframes. One interesting observation is that several of the "Top 10" at 6 months haven't even reached a year yet. This is a great sign of improving frac jobs.  Note that the state regulatory agencies are 2-3 months behind. 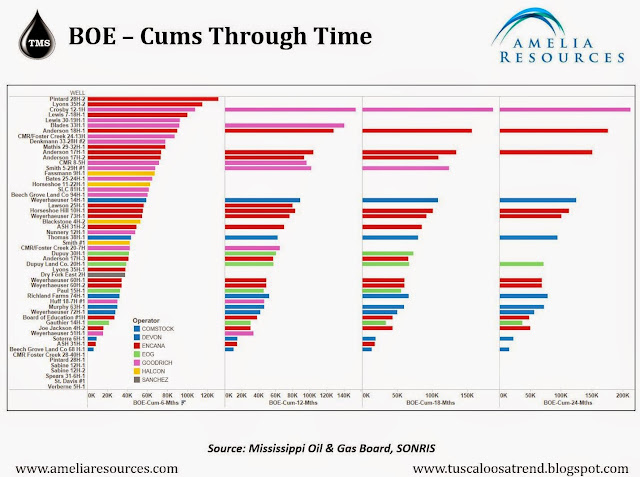 Posted by Kirk Barrell at 6:43 AM No comments:

To keep with the theme of oil production to date in the TMS, the chart below compares wells based on their monthly oil cumulatives. Only wells with an initial potential of 150 bbls/1000' are displayed. 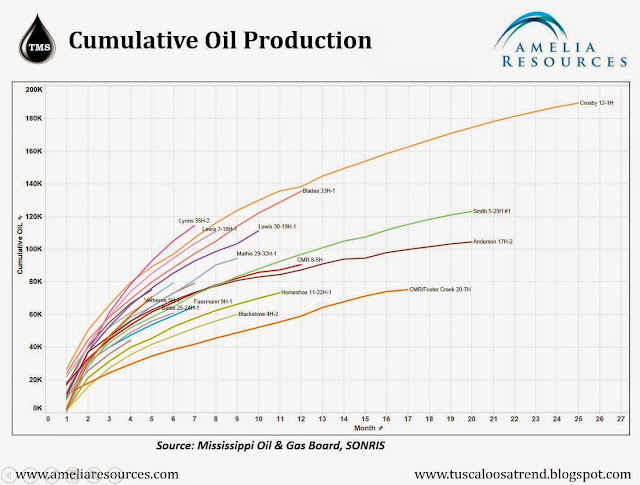 Below is a treemap of cumulative TMS well production to date. The monthly production data is sourced from SONRIS and the Mississippi Oil & Gas Board.  SONRIS is current through March, 2015 and the MSOGB through February, 2015. The Crosby 12-1 is still the largest producer, but there are some wells on the fast track such as the Blades 33-1, Pintard 28-2, and the Lyons 35-2.


Posted by Kirk Barrell at 5:05 AM No comments:


Goodrich provided an excellent update on their TMS activity yesterday in their earnings call. Most impressive is their significant reduction in drilling and completion costs.
Here are the TMS highlights:

Posted by Kirk Barrell at 10:35 AM No comments: