An official initial potential ("IP") has been released on SONRIS today for the well.

My phone has been ringing all day. So here are the most frequent questions with my answers:

1) Do you believe these numbers?
The state allows a lot of leeway with regards to how an operator determines the initial potential. So these data are very likely accurate for some point during the flowback. That doesn't mean that it represents the best rate nor does it represent the well after it completed full flowback from the frac job.  Operators tend to release smaller rates when they are still leasing. I hear that EOG is wrapping up their lease acquisition.  Flippers tend to buy based on the rumors.

2) Doesn't 64/64 represent a full open choke?
Yes. This is not the typical choke that would be used during long term production. Many believe that sustained open choke can damage the reservoir.

3) Isn't that a lot of water production?
Yes, but the Austin Chalk always produces a lot of water and some of this could still be flowback water. Speculators start chasing SWD permits!

4) What do you think of the mix of oil versus gas?
This GOR is typical for the area. The GOR in six months will be much more telling

5) Are you happy with this result?
As stated prior, the IP isn't very significant. The production rate, GOR, pressure, and water production in 6-12 months is much more important.

6) Should I keep buying leases next to EOG?
That's your call. What does the geology tell you to do?

7) I heard that lease prices are skyrocketing?
Not exactly. Proximity to the well and the rumored initial rates are driving some interesting transactions.

8) How does this well compare to EOG's well in Texas?
See answer #5

9) 4275' of perforations seems short compared to what I hear in other plays?
EOG in other plays tends to not drill really long laterals. I assume that they'll be conservative on their first set of wells. 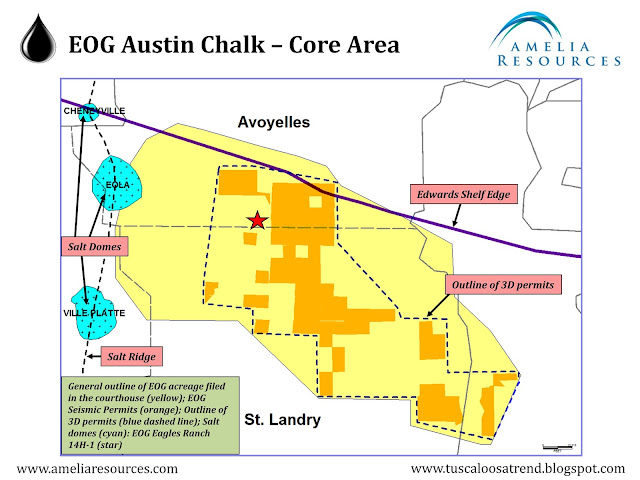 Posted by Kirk Barrell at 9:33 AM No comments:

On SONRIS, EOG is now listed as the operator of the Eagles Ranch 14H-1. No surprises there. 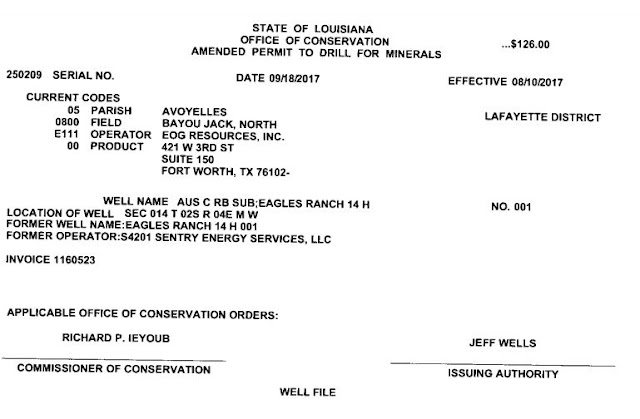 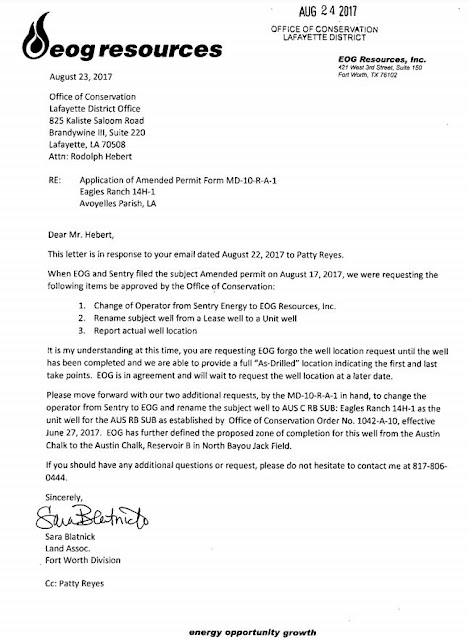 An initial potential has not been posted. Many trucks are reported to be entering and exiting the well site. Oil and water are the cargo. Many speculators are using advanced math to determine an oil flow rate. Stay tuned for an official release.

Posted by Kirk Barrell at 5:51 PM No comments: