There are currently three active rigs across Central Louisiana and Mississippi, two of which fall within the boundaries of the LAMS Stack Play.  Marathon, operating under Southwind Oil & Gas, is drilling an Austin Chalk well in Rapides Parish.  The Crowell LM 30-1 has a planned TVD of 15948'.  The company has acquired over 220,000 acres in the area.

ConocoPhillips is drilling in southwestern East Feliciana Parish for the Austin Chalk. The McKowen #1 has a planned TVD of 15500'. ConocoPhillips has assembled approximately 230,000 acres across the play. 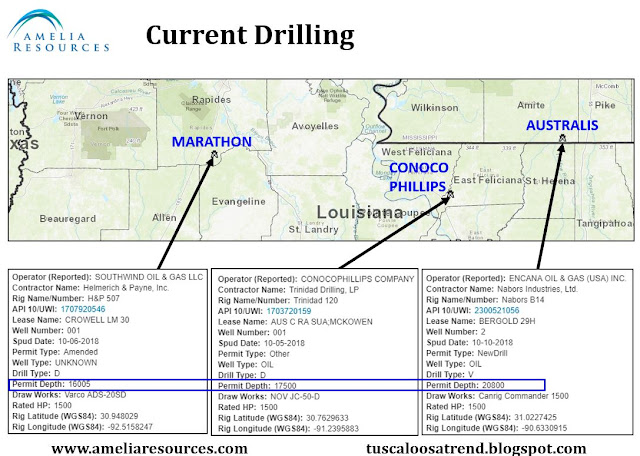 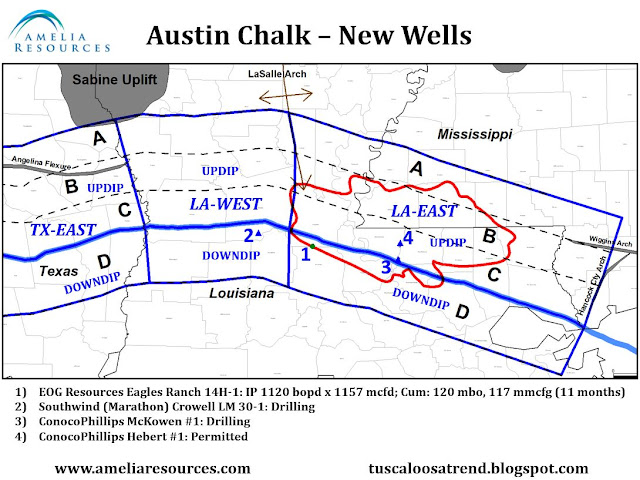 Posted by Kirk Barrell at 7:16 PM No comments:

The Austin Chalk Formation extends all of the way across the Gulf Coast into Mexico and the Gulf of Mexico.  The formation is present across a massive area, yet historically it has only produced in areas where the chalk is naturally fractured and charged with hydrocarbons.  The current play concept is to perform high-proppant fracs in areas with thick hydrocarbon-saturated matrix porosity. The Austin Chalk is believed to be sourced mostly by the Eagle Ford in Texas, while it self-sources in the Tuscaloosa Trend of Louisiana.

Several prominent geological features have structural influence on the regional geology in the trend. The Llano and Sabine Uplifts are significant and caused regional structural nosing in the downdip orientation.  The San Marcos and LaSalle Arches have local impact in a similar fashion.

As significant, is the influence that the Fredericksburg Shelf Edge has on the structure, deposition, depth, temperature, and pressure of the Austin Chalk across the onshore Gulf Coast. This shelf edge, also referred to as the Edwards Formation, is Lower Cretaceous in age and is present below the Buda/Washita Formation.  The shelf edge, similar to the modern day Great Barrier Reef in Australia, causes a steep structural dip change down into the basin that alters the environment for hydrocarbon generation and geologic structure.


For the purpose of making comparison and contrast of the geology and drilling results, I have created five geographic regions across the play: TX-South, TX-Central, TX-East, LA-West, and LA-East.  The regions are oriented parallel to the Fredericksburg Shelf Edge.  The boundaries are purely geographic except that they parallel the shelf edge.  These regions will be used to compare and contrast the geology, drilling, completions, and production as this play progresses.  In addition, I have created four strike-trending fairways that parallel the shelf edge (A, B, C, and D).  These are geographic, yet will provide a context to compare and contrast the geology and results across the play. Fairways A, B, and C are updip to the shelf edge, while Fairway D is downdip. 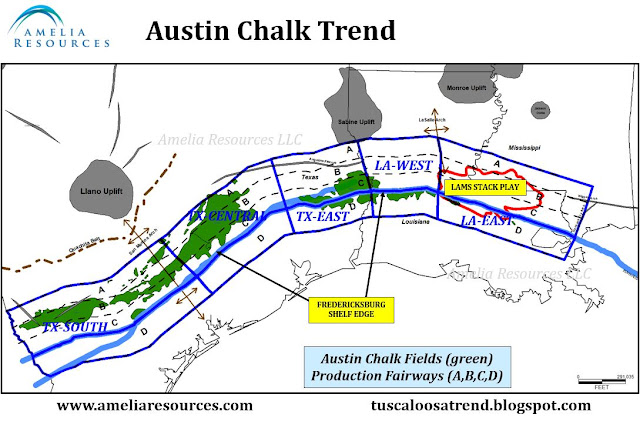 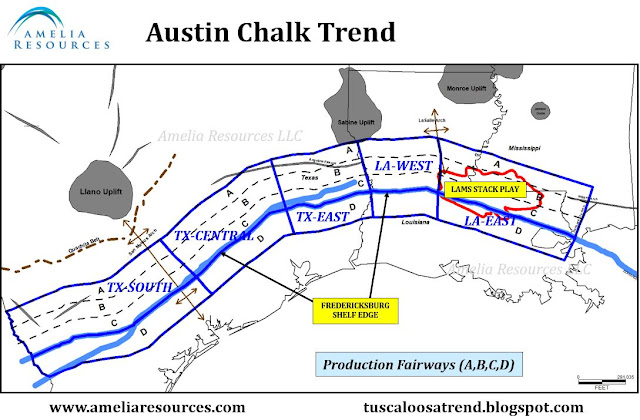 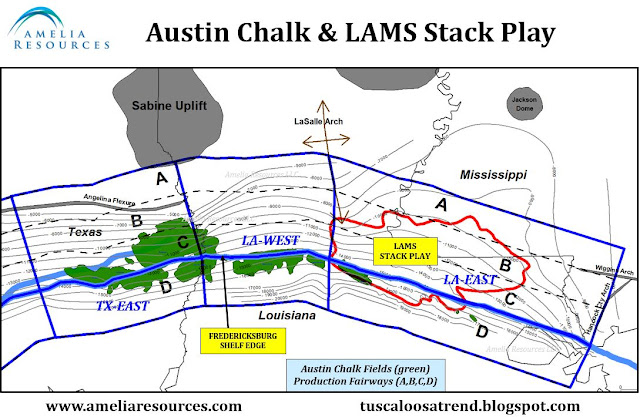 The boundaries of TX-East, LA-West, and LA-East align with dip-trending structural arches.  The Sabine Uplift results in structural nosing along the TX-LA state line.  The LaSalle Arch causes significant structural nosing in the downdip direction.  The eastern boundary of LA-East is bounded by the Hancock County Arch.  This feature causes regional structural nosing downdip into the Lake Borgne area of Louisiana. 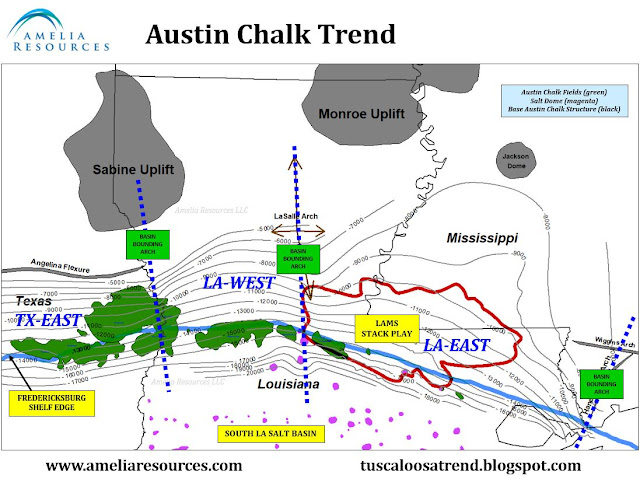 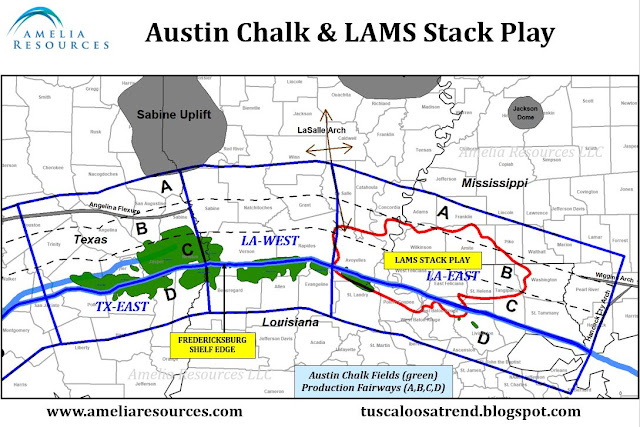 I have divided all five regions into sub-regions updip and downdip.  Because of its structural significance, I have used the shelf edge as the dividing point. 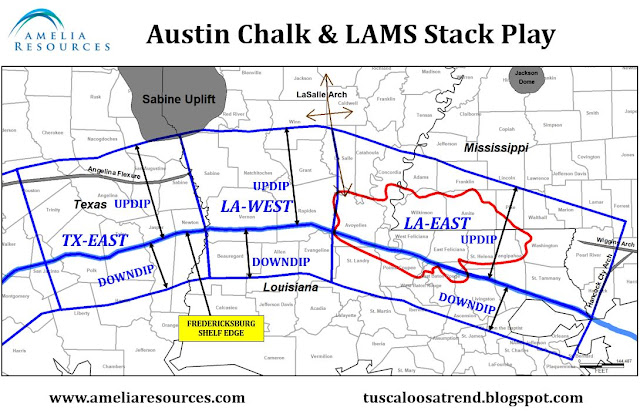 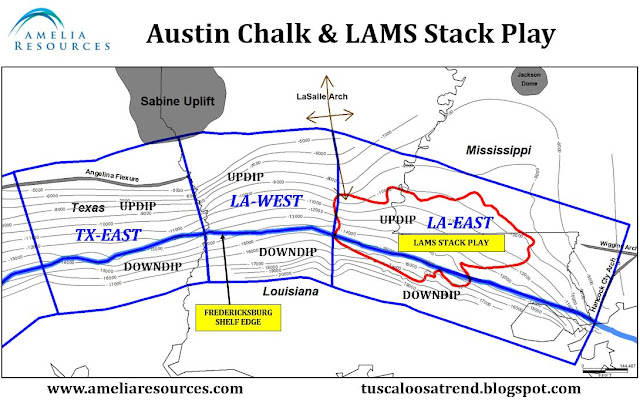