This is the slide presentation that I recently gave at the New Orleans SIPES Luncheon.

For the actual presentation, follow this link to the New Orleans SIPES website.
http://sipesneworleans.homestead.com/Videos.html
Posted by Kirk Barrell at 11:00 AM No comments:

Two significant events have come to light this week. First, Equinor has acquired a 25% working interest position in Marathon's project.  Equinor has acreage near the Texas state line. This joint venture provides some more financial strength to Marathon's efforts.  In today's market, joint ventures make a lot of sense.


This ties into my discussion from yesterday and my post on the regions of the play.  The deeper, more pressured region of the play, will have drilling challenges.  Those challenges can be very costly as we saw in Marathon's Crowell #1.

The map below is from my SIPES presentation from a couple of weeks ago. It compares a variety of attributes from the four "quadrants" of the play: LA-EAST Updip, LA-EAST Downdip, LA-WEST Updip, LA-WEST Downdip. 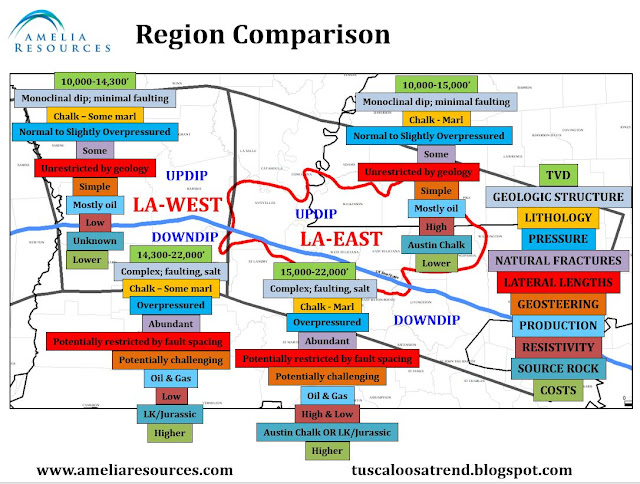 
With activity shifted to the LA-WEST region of the Austin Chalk Play, it's a good time to "drill deeper" on the new drilling locations.  Both the Marathon and Prime Rock wells are in the southern and deeper portion of Masters Creek Field.  The map below depicts their locations along with the historical Austin Chalk producing wells.  Marathon had a successful re-drill of the Crowell location in 52 days.  Prime Rock is now drilling the Crosby 10-1.  These are deep wells with TVD's of 16200' and 15332'. 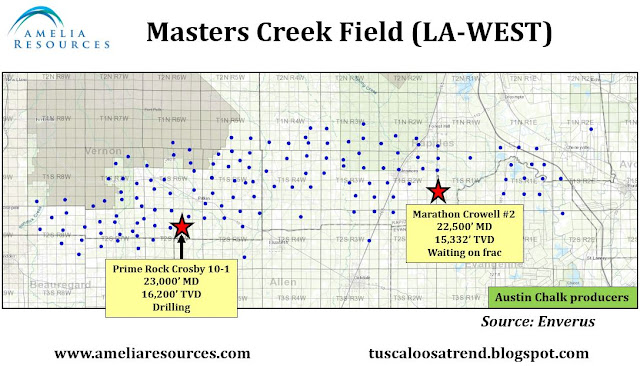 The next two maps depict cumulative BOE bubble maps across Masters Creek Field.  The larger circles represent the best historical producers.  These maps reveal localized "sweet spots" across the field.  Having interpreted the 3D seismic on the west side of the field, I can state that the prolific producers there were always proximal to down-to-the-basin faults where fracture clusters are greatest.  To date, all acres haven't been created equal in this field. 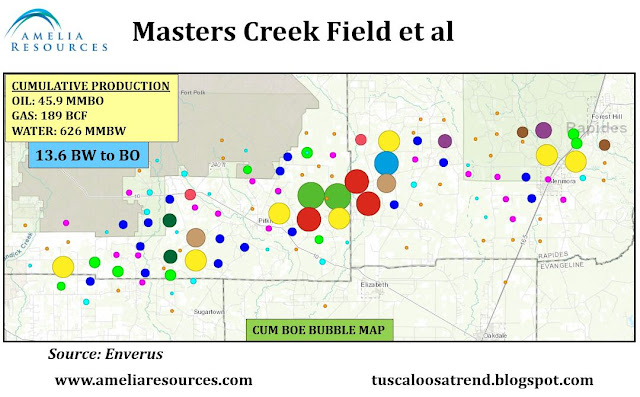 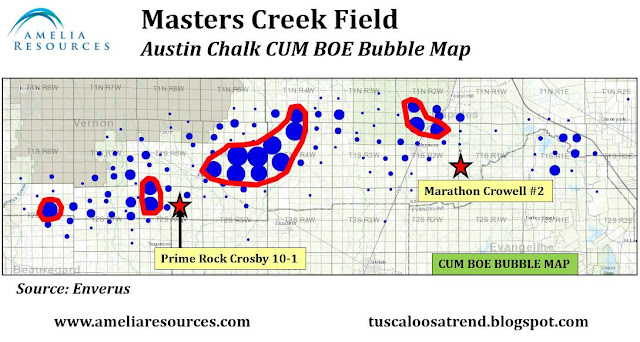 The next two maps depict the cumulative production of oil and gas for each well. The Marathon Crowell #2 is on strike with poor to decent producers, but has good producers to the northwest.  Note that the offset wells produce primarily natural gas which is currently selling at $2.83/mcf.

The Prime Rock Crosby 10-1 has a nearby well that produced 4 bcf and 1 mmbo.  Most of the other wells on strike are marginal producers.  Both of these wells will be expensive so large volumes of hydrocarbons need to be produced. 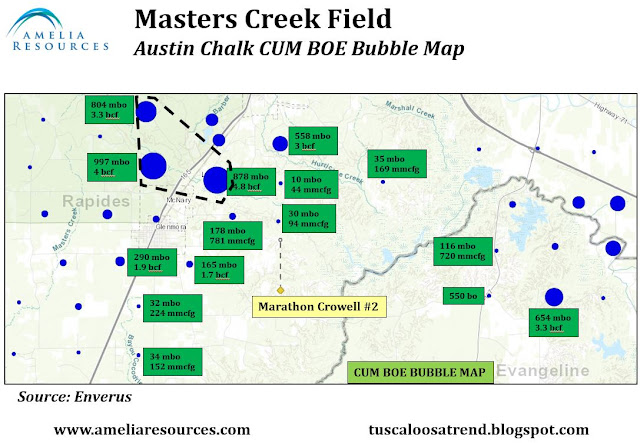 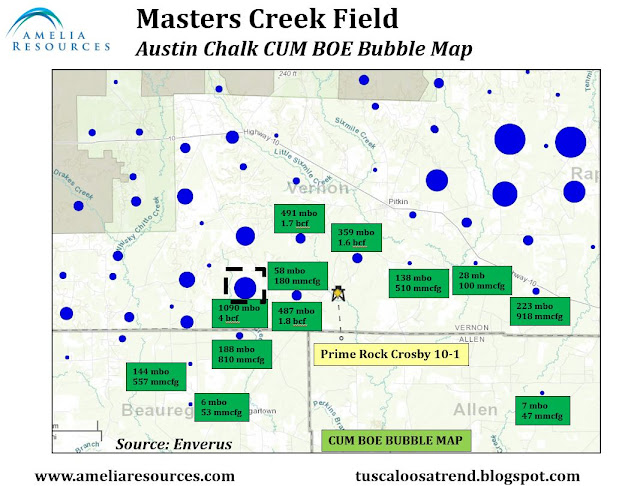 The maps below represent gas/oil ratios (GOR) for the historical production across the field.  Both wells will likely be in the 4000 range.  Gas will greatly assist producing from the low porosity and permeability, but at the current market prices, oil is a better strategic and economic target. 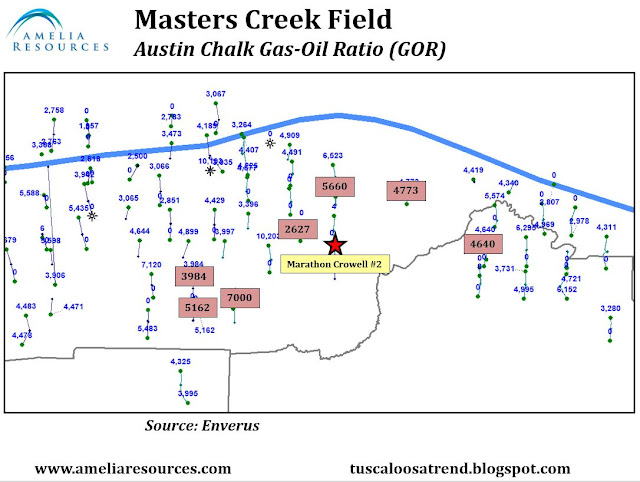 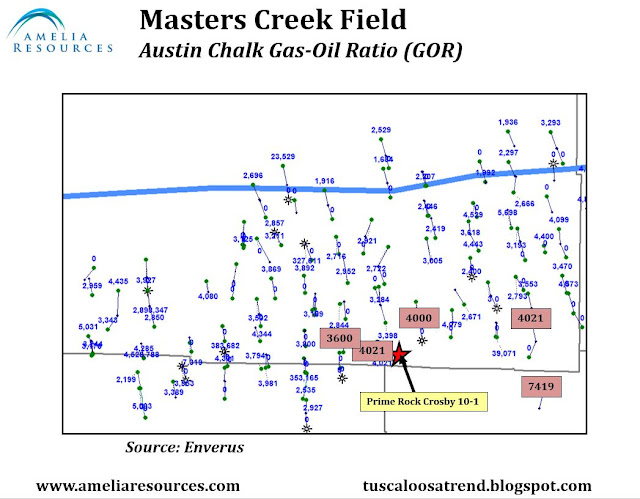 This region of the play in Louisiana illustrates much lower resistivities than seen in the prolific trend of Texas and the LA-EAST in Louisiana.  One reason for that could be higher water saturations in the chalk reservoir.  The field historically produced 13.6 barrels of water to every barrel of oil.  That's an extremely high water ratio.  Disposing of water is expensive and impacts the overall economics. One of the risk factors is that a large-proppant frac could increase the water volumes.

The low DLogR values from the Passey equation indicate low total organic carbon (TOC).  It is my belief that the production at Masters Creek Field is derived from a deeper source rock in the Lower Cretaceous or Jurassic.  Large faults served as migration paths into the Austin Chalk. 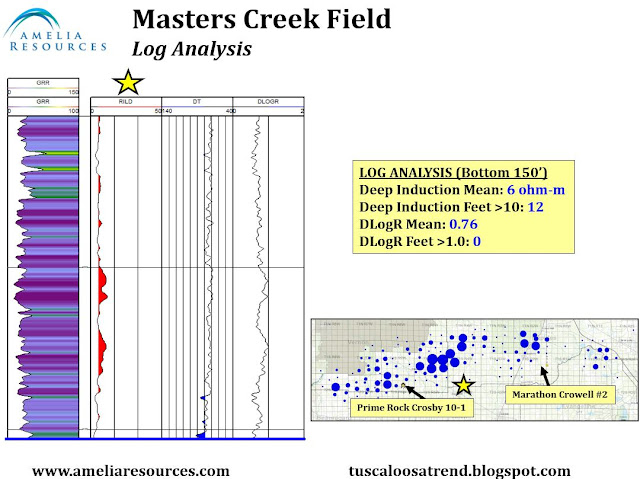 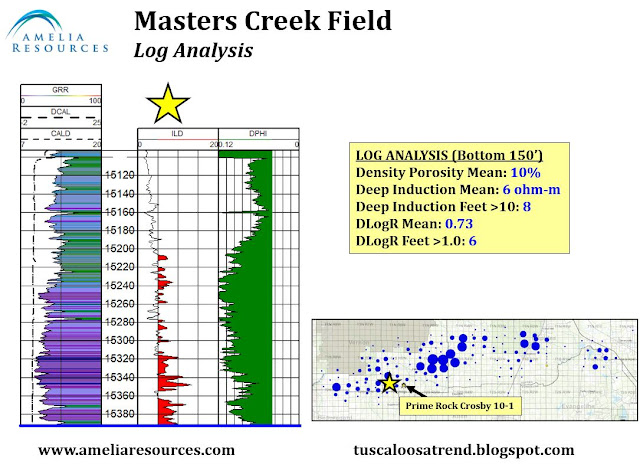 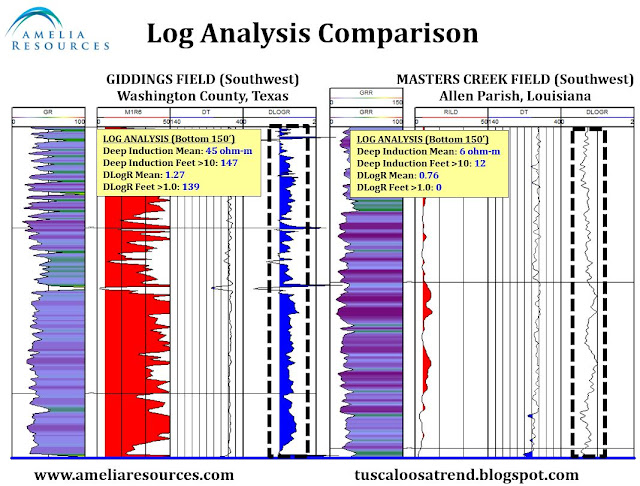 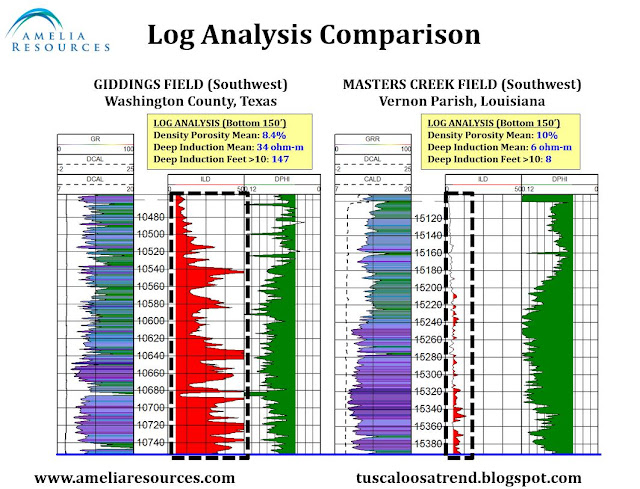 These two wells will be watched closely for the LA-WEST and downdip portion of the play.  Marathon proved on the Crowell #1 that drilling in this high pressure environment is very challenging.  Good luck to both companies!