Posted by Kirk Barrell at 3:10 PM No comments:

"As a geologist, Kirk Barrell has studied what lies below ground for decades on the hunt for oil and gas pockets across Louisiana. But now he's searching for land to build solar farms that won't be a wetland in 50 years along the Gulf Coast.

Barrell is co-founder of NuQuest Energy, a renewable energy developer looking to build large solar farms in Louisiana, Texas and Mississippi then sell the electricity manufactured from the sun's rays to utility companies.

NuQuest Energy is based in New Orleans and was created by a group of fossil fuel industry service executives looking to hedge their oil and gas bets by jumping into the renewable energy business. NuQuest Energy co-founders include Denis Taylor and Bob Rosamond, partners at Houston-based engineering firm Audubon Companies, alongside Alex Guitart, president of New Orleans Land & Title Company LLC. Barrell also runs Amelia Resources which secures oil and gas leases from private landowners for sale to drillers interested in the Louisiana shale plays.

"It just seems that right now there's a strong tailwind pushing for this (energy) transition to happen quickly," said Barrell who saw parallels between the skills it takes to be successful in oil and gas applicable to renewable power. "There's been a momentum shift. We've all done well in our businesses by moving early and we see opportunity."

Entergy is one utility provider which is seeking to buy several hundred megawatts of renewable power from developers in the coming years. Companies are actively bidding for an exclusive long-term deal with Entergy. As such, it's attracted businesses from around the world interested in making money on solar projects.

Barrell has been negotiating land lease agreements with landowners for oil and gas exploration across Louisiana for decades. Those same discussions are now happening with farmers considering abandoning crops for royalties from solar power manufacturing fields.

NuQuest Energy was incorporated in March and expects to close on a deal soon for its first self-funded solar project upwards of 100 megawatts of electricity, known as utility-scale solar. The company built its own software tool which it plans to use in scouting for suitable land for solar, close to the existing grid and transmission lines where there may be a lack of power but high demand.

The three variables in a solar project in Southeast Louisiana are negotiating with landowners, typically family-owned farms and ranches, navigating wetlands, and the regulatory process. Unlike during an exploratory well deep underground where it may or may not be profitable to drill, the sun has a much higher chance of shining year round.

"We've met with many farmers about the financials of future consistent income," he said. "If you look at the risk of farming, declining crop yields and expense (of running a farm such as labor) you're seeing three to four times the dollar per acre (for solar)."

But that doesn't mean the group is abandoning fossil fuel exploration.

"We're all still active in oil and natural gas but this is an expansion of our efforts, you could see it as balancing the portfolio a little bit," Barrell said.

In Louisiana, there's gaps in the grid the Entergy wants to fill but the population hubs are in the Southeast where wetlands are more common which is another hurdle to jump over and the company is banking it's got a home team advantage in its knowledge of the land and data to back it up.

"One of our challenges is the wetlands. It could be (a good site) from the technical aspects of the grid but then you look at your map and it's a deal killer, it's about finding dry land," he said."

Posted by Kirk Barrell at 2:44 PM No comments:

The "energy transition" is going to take 30-40 years. Oil and natural gas will be paramount to the United States economy and security for many decades. Our country represents 4.27% of the world's population, yet we represent 17% of total world primary energy consumption. As a country we need a "full court press" across all energy sources immediately. Our internal audit revealed that we have over 200,000 acres secured in the TMS Play.  We need some portfolio balance.

I'm really excited about this new venture with some amazing Co-Founders. We're very focused on developing solar farms in Louisiana and Mississippi.
Please reach out if you have land that you would like reviewed for the potential of a solar farm.
Our key criteria:
-at least 800 contiguous acres (can be multiple owners)
-no wetlands
-flat
-ideally no timber
-near transmission and a substation
-cropland is ideal

It's been a quiet year in the oil patch other than bankruptcies and layoffs.  I'm glad to have some activity to report on.

White River Operating has released the initial potential on the Deshotels 24H-1. SONRIS reports the following for the well:

Congratulations to the White River, Blackbrush, and Gage teams.  The well was completed with an open hole completion and no hydraulic fracturing (frac) job.  This approach is much cheaper than the recent frac'd Austin Chalk wells by EOG, ConocoPhillips, Marathon, and Prime Rock. Lower costs will assist the economic viability of the project.

I was involved with a 3D acquisition and drilling project in this area back in the 2009-11 timeframe (3D map below).  The project, Turner Bayou, originally focused on shallow gas amplitudes.  A small public Australian company, Pryme Energy, funded the large majority of the project.

After the shallow assessment, we performed an interpretation on the Austin Chalk interval.  Seismic processing and coherence attributes revealed a strike-trending fracture fairway (map below).  In addition, the seismic anomaly covered the area of the Moncrief Martin B-1 which was drilled in 1978.  This vertical Austin Chalk completion has produced 582,000 barrels of oil and 587 million cubic feet of gas.  It clearly was connected to a fracture swarm and was the key variable leading to the drilling of our Austin Chalk wells.

In parallel in 2010-11, Anadarko was assembling a 250,000 acre block from the Texas state line to Pointe Coupee Parish.  Anadarko was having great success at the Texas/Louisiana border. A South Korean operator, Atinum, was also drilling in the area. None of the wells were being frac'd.  Our group of very small players along with Pryme Energy and with Nelson Energy as operator drilled the Deshotels 13H-1 and 20H-1.  Both wells drilled successfully and had tremendous natural fracturing and associated gas shows.  There was great anticipation on the completions of both wells.  Unfortunately, the results were very disappointing. Many theories have been made over the years since, but the production results and the fractures/shows didn't align.  All believed that the completions failed to keep access open to the fracture network

We had a lease in Anadarko's Rabalais unit to the northeast and participated in that well even though the coherence maps didn't reveal any anomaly or fractures.  That well had the quietest mudlog that I've ever seen in my entire career.....zero fractures and zero gas.  It seemed to prove that the coherency anomalies aligned with the presence of fractures.  Some of our group went on to drill the Rosewood Plantation 21H-1 which had many challenges.  Meanwhile, Anadarko and Atinum struggled right along side us. By 2013, all players "cut bait" and another Chalk Era had ended.

I've posted numerous slides below, many of which are still online from Pryme Energy's many "overhyped" press releases.  The links will present many of the long "tales" of capital destruction.  I've also posted some links on White River and its holding companies.  Ecoark is a bizarre mix of ventures.

As always with the Austin Chalk, the water will be important to monitor over the months ahead.  Saltwater disposal wells add a significant amount to the cost structure and negatively impact economics.  In a future post, I will compare the frac vs open hole completions. I question whether the recent frac results justify the extra costs.  Is the frac only accessing more water?

Let's hope that oil stays above $60 and generates some activity and stability in the industry and region.  This layoff cycle has likely exceeded the one in the mid-80's.  Much talent has left the industry for good unfortunately. 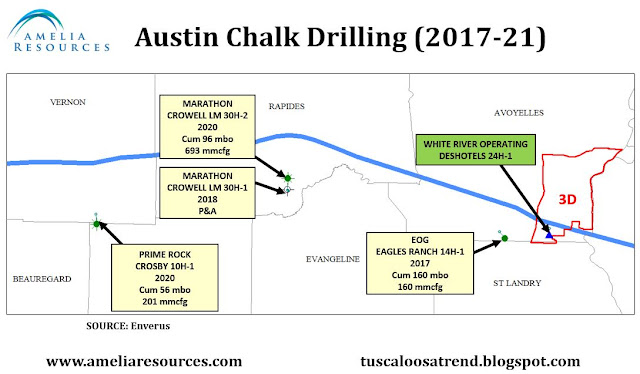 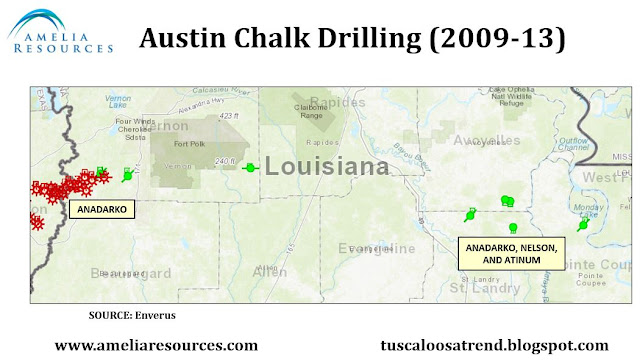 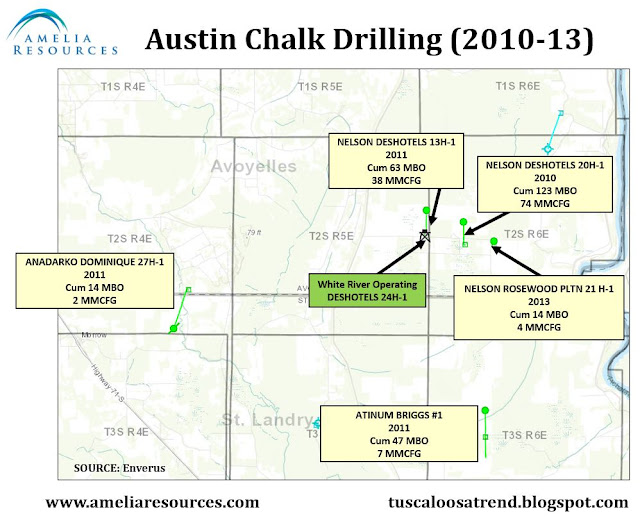 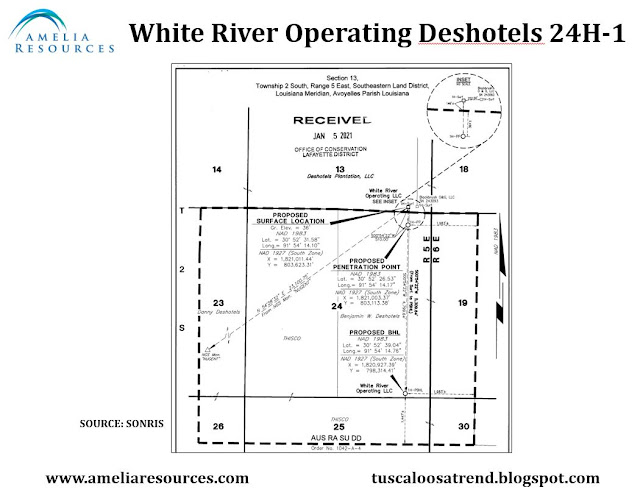 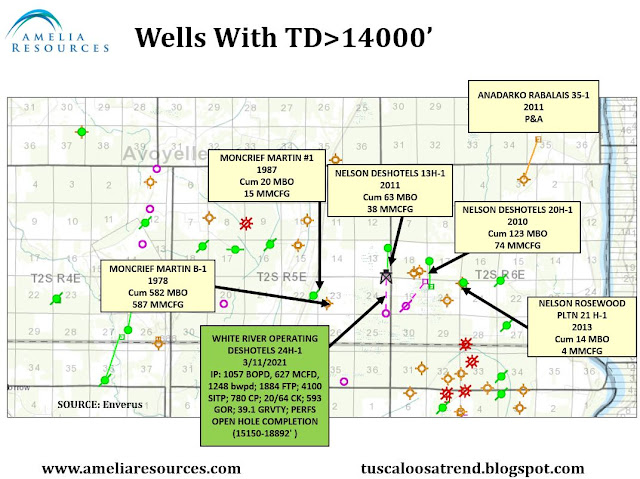 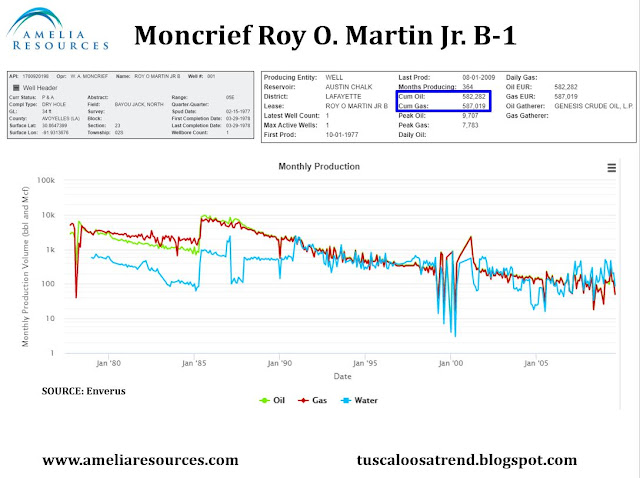 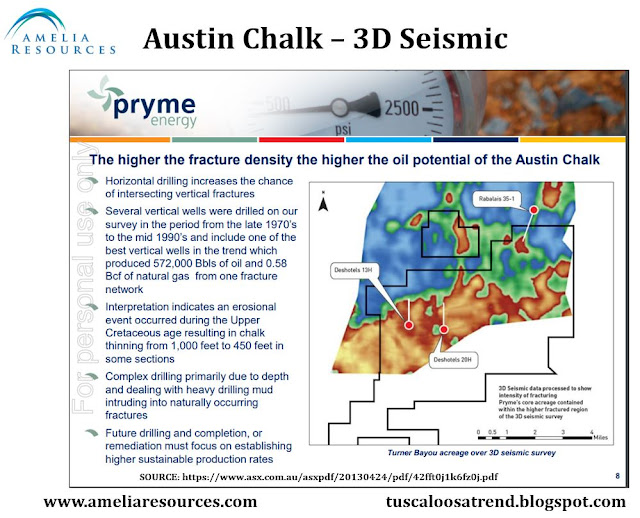 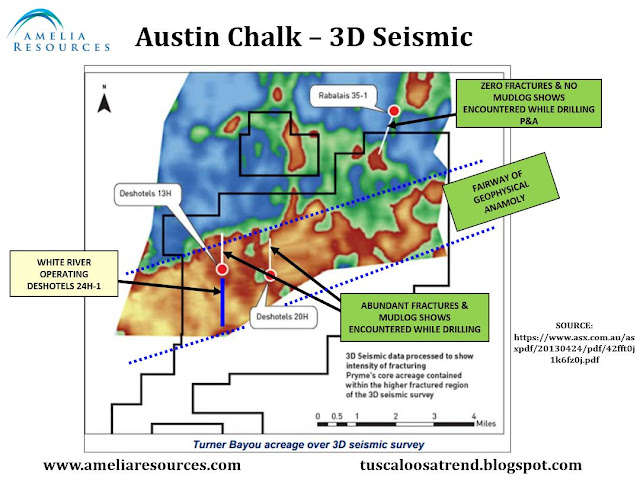 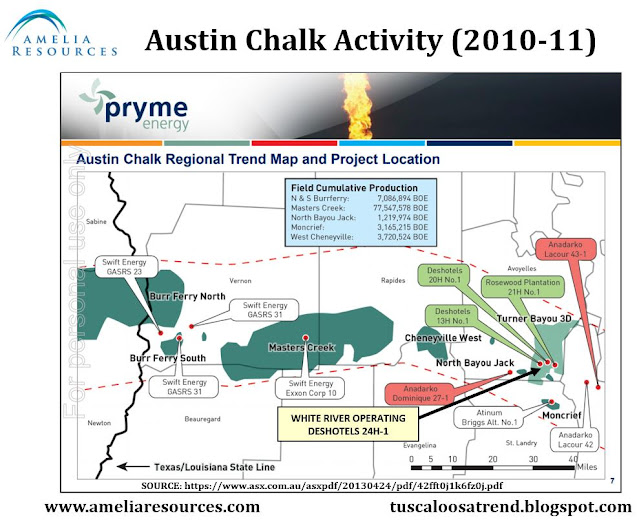 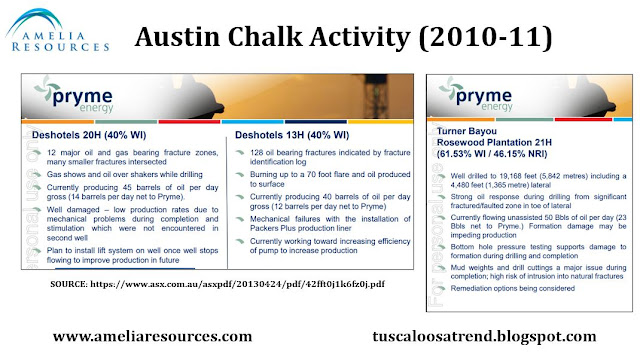 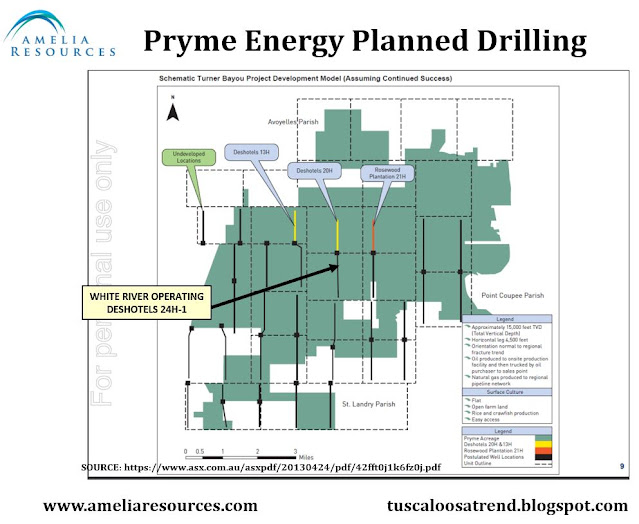 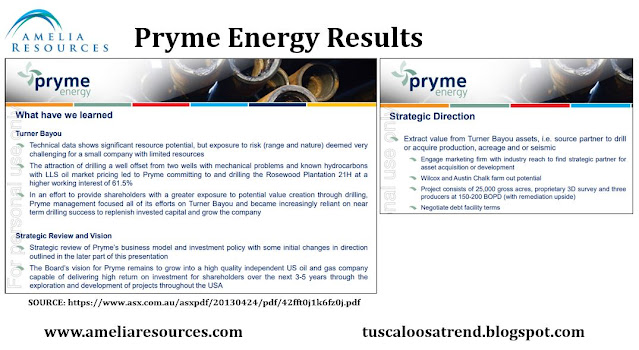 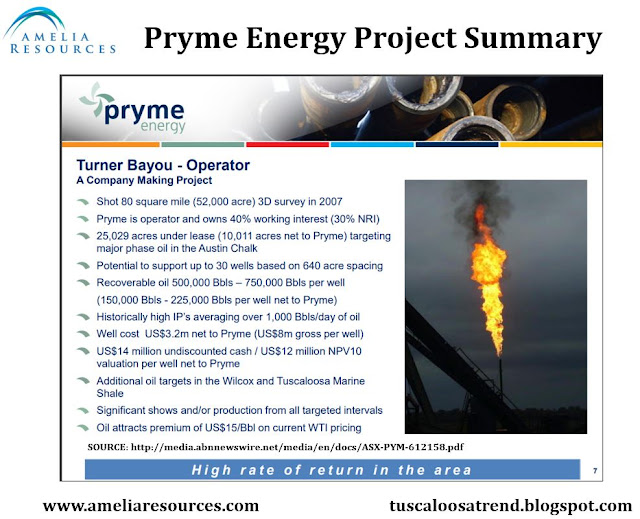 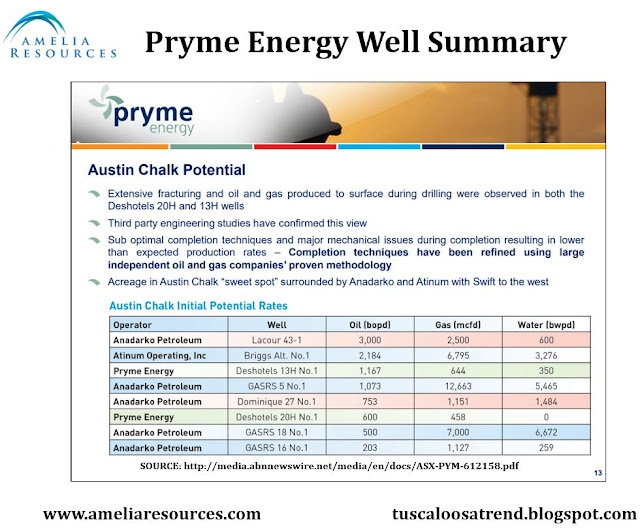 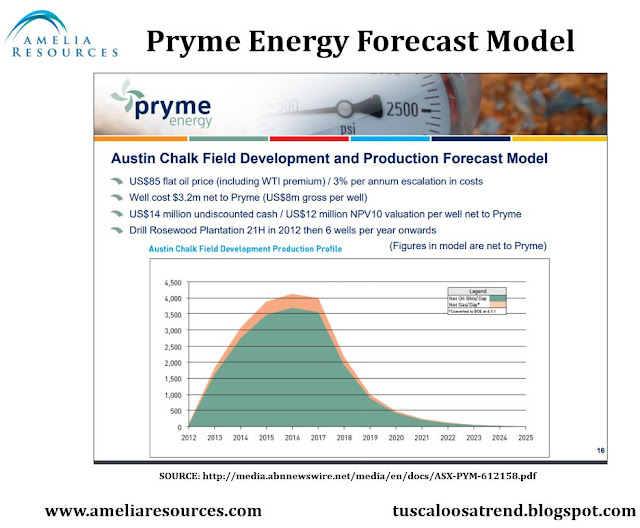 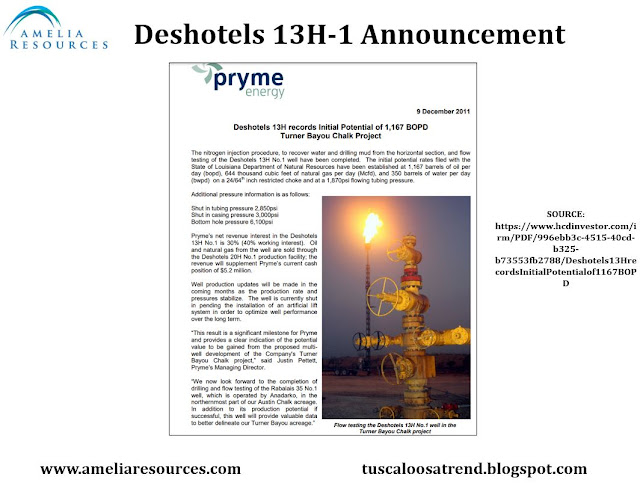 Posted by Kirk Barrell at 5:46 PM No comments: